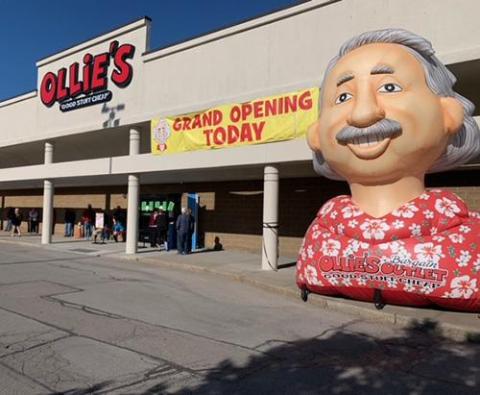 The retailer of closeouts and excess inventory has opened its 450th store in Overland Park, Kan. Ollie’s has been opening 50 to 55 locations annually, with an ultimate goal of at least 1,050 stores.

“As we celebrate Ollie’s 40th anniversary this year, we are proud to hit another major milestone in our growth story with the opening of our 450th store,” said John Swygert, president and CEO of Harrisburg, Pa.-based Ollie’s. “Now, more than ever, we want to provide more communities with great brand name deals every day as we expand our footprint.”

Swygert has assumed the additional role of interim CFO until a successor is named for CFO Jay Stasz, who left the company at the end of June.

In June, Ollie’s reported that its first quarter sales fell 10.1% to $406.7 million and same-store sales dropped 17%. The company predicted that would soon change because of record-high gasoline prices and swelling inventories at big-box rivals.

“We were pleased with our first quarter results given that we were up against headwinds including strong stimulus-induced sales a year ago, cooler weather which impacted sales of our seasonal products, and a consumer faced with significantly higher inflation, particularly on gas and food,” stated Swygert. “Our current sales trends have improved meaningfully in the second quarter fueled by increased demand for warm weather seasonal products, combined with our incredible deals and strong inventory position."