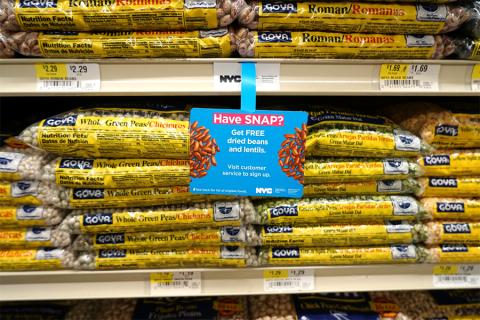 Get the Good Stuff signage at a Fine Fare supermarket shelf

Inspired by research findings that access to quality, whole foods is key to the development of healthy residents and communities, but that access in underserved areas can be a problem, The Fund for Public Health in New York City, on behalf of the New York City Department of Health and Mental Hygiene (DOHMH), has joined forces with retail technology company STCR and local grocery operator Fine Fare to roll out Get the Good Stuff, a produce incentive program for Supplemental Nutrition Assistance Program (SNAP) recipients.

The first grocer to launch the program is Fine Fare, which has independently operated stores in the New York metro area, supported by retail technology company STCR, which developed the effort in tandem with Frank Pimentel, owner of the Fine Fare Supermarket at 459 East 149th Street in the Bronx, and DOHMH.

Get the Good Stuff will run through April 30, 2020, with the expectation that it will likely continue through April 20, 2021. Funding is approved through the United States Department of Agriculture. The Fund for Public Health in New York City will continue to seek more stores to take part in the program and will work with the Department of Health to help with program implementation.

To participate, stores must meet the following criteria:

Consumers interested in enrolling in the program can go to participating Fine Fare stores in the Queens neighborhood of Jamaica and in the Bronx.

Recently, SNAP piloted an online purchasing program in New York, with Amazon, Walmart and ShopRite among the participants, and plans to roll out to other states. A similar produce incentive program targeting SNAP recipients, Double Up Food Bucks, a public-private partnership pioneered by Ann Arbor, Mich.-based nonprofit Fair Food Network, is currently available in 29 states, according to the program’s website.

When contacted by Progressive Grocer, a representative for STCR noted that "there are a few other pilot locations in addition to Fine Fare that have either launched or are in the process of launching in the very near future," although the rep declined to provide specifics. However, the DOHMH has revealed that Three Guys from Brooklyn, an open-air market in the New York City borough, will roll out Get the Good Stuff early next year.

Additionally, the STCR rep told PG that DOHMH is evaluating stores to continue the expansion of Get the Good Stuff into 2021, but no definitive plans have been confirmed as of yet, and so far discussions have involved only New York City grocers.