Whatever else one might say about seafood in supermarkets, it’s certainly prominent. According to the exclusive research undertaken for Progressive Grocer’s annual Retail Seafood Review, 80.4 percent of category executives who responded to PG’s survey have a service seafood department, generating an average of 8.4 percent of total sales.

What’s more, the category is still perceived to be growing by a majority of respondents: 50 percent reported that total seafood sales had increased over the past 12 months, while 38.9 percent noted that sales had at least held steady, and only 11.1 percent saw sales decline. Looking ahead, 63.9 percent predicted that their seafood sales would increase, with 36.1 percent expecting them to remain the same, and no one — 0 percent — anticipating a sales decrease. Execs polled said that they believed sales would rise, on average, by a healthy 4.2 percent.

The nutritional advantages of seafood appear to be driving this uptick, but there are other factors in play as well.

“When asked why they eat seafood, 89 percent [of consumers] say it is because seafood tastes great, and 88 percent say it is because seafood is healthy,” observes Kyle Chamberlin, publications manager at Chicago-based market research company Datassential. “This indicates that nutrition is on nearly all consumers’ minds when they are eating seafood. Interestingly, fewer than half said they eat seafood because they are trying to eat less meat, suggesting that fish and shellfish are not necessarily seen as healthier meat alternatives, but rather as delicious proteins in their own right. When promoting seafood items, operators say ‘healthy’ positioning is far more effective than indulgent or customizable.”

“Seafood is high in protein and is known to have many health benefits,” affirms Jason Pride, VP of meat/seafood at West Des Moines, Iowa-based Hy-Vee. “Additionally, customers are looking for quick, easy and healthy proteins, and seafood fits the bill. … Items that are already seasoned, breaded or packaged in oven- or grill-ready containers make it easy for customers to prepare the entrées at home. All of these factors contribute to continued sales increases.”

“We believe there has been an upward shift in consumer behavior and overall opinion on eating seafood,” notes Bluzette Carline, director of marketing at Beaver Street Fisheries (BSF), a Jacksonville, Fla.-based provider of wholesale and retail seafood. “Efforts in education and promotion around the benefits of seafood may have some part in the steady increase.” 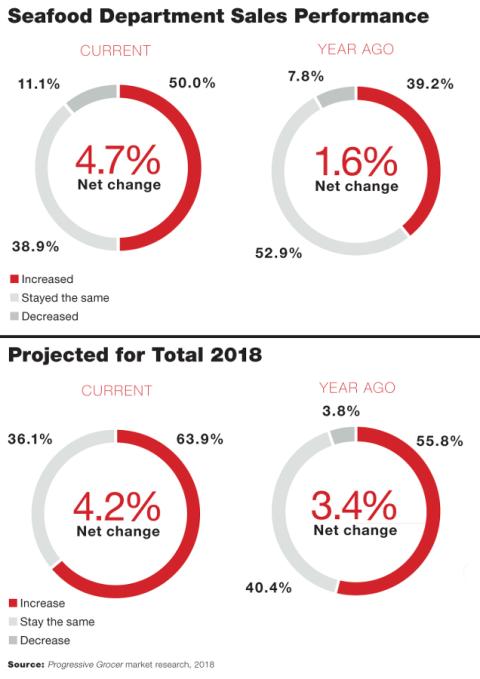 From December 2016 to December 2017, the Bureau of Labor Statistics’ consumer price index for meats, poultry, fish and eggs increased 2.8 percent, after declining over the same period in 2015 and 2016, indicating an easing of deflation and enabling retailers to pass on those higher prices to consumers. Unlike in 2017, none of the retailers surveyed by PG brought up price as a significant factor in seafood sales; one respondent noted that due to price deflation, they were actually “up a little.” According to Chicago-based Nielsen, for the 52 weeks ended July 1, 2017, fresh seafood, which the company identified as a top contributor to inflation, dropped 2 percent in overall volume, in spite of dollar growth in prepared crustaceans (5 percent), prepared fish (4 percent) and shrimp (3 percent).

Of the types of seafood offered at retail, U.S. wild-caught seafood remained tops in terms of consumer demand, with 58.1 percent of respondents reporting an increase in demand, 41.9 percent saying demand stayed the same and none seeing a decline. For imported wild-caught seafood, just 34.9 percent saw an increase in demand, while 51.2 percent experienced no change in demand and 14 percent reported less demand. For farm-raised seafood, only 23.3 percent noted higher demand, while a hefty 62.8 percent said demand had remained the same and 14 percent reported a decline in demand.

He adds that “seafood … either caught locally or in U.S. waters is much more desirable to most consumers than seafood without any sourcing information.” To address the matter of sourcing, one respondent to PG’s survey suggested “a pedigree program, with DNA testing, to prove up country-of-origin labels (COOL) and species of seafood,” as there are “too many mislabeled cheaters out there.”

Interestingly, despite shoppers’ concerns about where their food comes from, Chamberlin goes on to assert, “Sustainability is low on consumers’ priority lists when they are purchasing seafood.

It seems, however, that shopper demand for sustainability may be catching up with that for wild-caught product. “Research conducted on behalf of ASMI by Datassential in 2017 to understand behaviors among seafood eaters revealed that 67 percent of consumers feel it is important that fish they purchase is naturally caught or wild, and 64 percent feel it is important that the fish they purchase is environmentally sustainable,” says Parr.

Given that finding, it’s not surprising that sustainability reigned as a major differentiation strategy among retailers, with 66.7 percent of respondents to PG’s survey acknowledging that they have a sustainable seafood program in place, and of those who do, fully 91.7 percent promoting it as a point of differentiation. That said, only 38.9 percent experienced increased demand for sustainable seafood over the past year, while 61.1 percent saw it remain the same — no one reported a decline — so perhaps demand is plateauing.

“One hundred percent of our fresh seafood, as well as Hy-Vee and national-brand frozen seafood and sushi, meet our Seafood Procurement Policy,” notes Pride. “Customers want to know they are purchasing responsibly sourced seafood so we continue to have supply for generations to come. All of the tuna offered in our full-service seafood case is Fair Trade certified as well. This lets the customer know that it was caught in a way that supports the fishing community and its people.”

“With the addition of our 100 percent Sustainable Seafood program, we offer a consistent promotion on the highest-sought-after items in the program, and our customers have responded,” says Todd Allen, senior manager, meat and seafood at West Sacramento, Calif.-based Raley’s, who adds that sustainability is a key reason that the grocer expects its seafood sales to increase in 2018, along with “high quality at value” and health considerations.

“Sustainable sourcing practices is a core value of Raley’s; we want our customers to trust that the product they purchase from Raley’s will be the best quality and most responsibly sourced available,” continues Allen. “We have rigorous standards that we hold our suppliers to that guarantee quality and sourcing.” 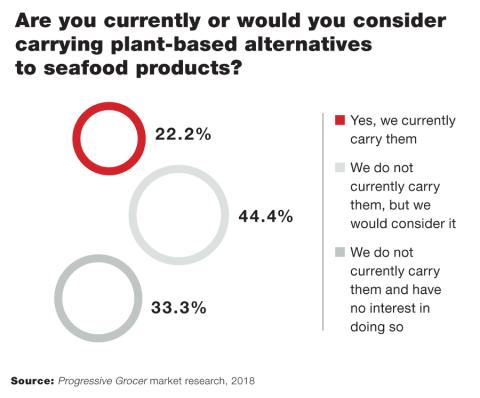 As for getting the word out, he notes: “We promote and communicate our sustainable seafood program with our weekly newspaper circular, radio spots, in-store POS and our website. I think responsibly sourced seafood matters to our customers, because everyone … would like to preserve our ocean’s bounty for future generations.”

Perhaps the current seafood preferences of shoppers are best summed up by another respondent to PG’s survey: “Customers are very vocal. They want seafood from the U.S.A., Canada [and the] Gulf of Mexico caught in sustainable, managed fisheries. They definitely don’t want anything from China, processed in China, or other Eastern sources.”

One clue as to what might become an effective differentiation strategy is in the area of plant-based alternatives, which have already infiltrated supermarket meat departments with such highly publicized brands as Beyond Meat (see PG’s Retail Meat Review in the February 2018 issue) Already, 22.2 percent of those surveyed carry plant-based alternatives to seafood in their stores, while 44.4 percent don’t yet offer them but would consider it. Still, a substantial 33.3 percent said that they not only don’t carry such products, but they also have no interest in doing so. However, of those who already carry or would consider carrying plant-based seafood alternatives, 54.2 percent said that they were in favor of merchandising plant-based items alongside traditional seafood products, thereby potentially bringing new customers — vegetarians, vegans, people with seafood allergies, and those with religious or moral scruples regarding the consumption of certain seafood items— into the department. 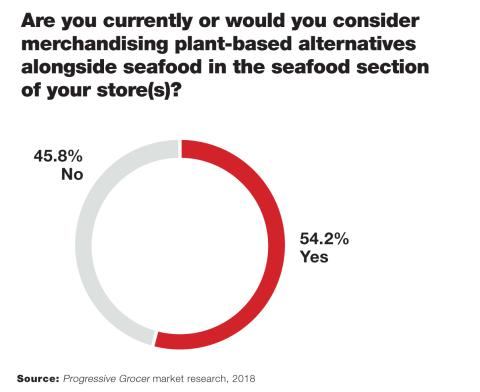 “Consumer demand for plant-based alternatives to traditional animal proteins is skyrocketing, in response to concerns over diet-related disease, the environmental impacts of animal agriculture and the treatment of animals,” explains David Benzaquen, CEO of New York-based Ocean Hugger Foods Inc., creator of Ahimi, an ahi tuna alternative made from tomatoes. “Over the last decade, dozens of companies in the dairy, egg, meat and poultry alternative space have launched to meet this demand, but few have looked at seafood. … As consumers seek delicious, sustainable and healthy alternatives to traditional animal proteins, plant-based seafood items are a great solution.”

Asked about the sales performance of Ocean Hugger’s product, which is the central ingredient in plant-based sushi sold at Whole Foods Market stores, Benzaquen replies: “Our success has been fantastic — so much so that we’re running on all cylinders to keep up! We have demand from thousands of stores and restaurants around the world, including some of the largest retail chains globally.”

Although Raley’s doesn’t yet carry plant-based seafood-style options, Allen says: “As our customer interest grows for that type of product, we will certainly accommodate their needs. We would merchandise these products with the seafood as an alternative for the discretion of our shopper.”