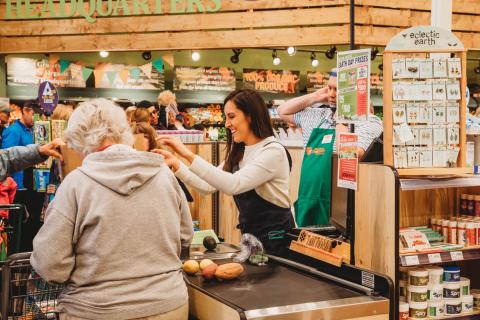 Family-operated Natural Grocers by Vitamin Cottage Inc. has released results for its third quarter of fiscal 2022 ended June 30 and refined its outlook for fiscal 2022.

During the  quarte­­r, net sales increased $7.7 million, or 3.0%, to $266.3 million, compared with the third quarter of fiscal 2021, due to a $6.4 million increase in comparable-store sales and a $2.1 million increase in new-store sales, partly offset by a $0.8 million decrease in sales from one store that closed at the beginning of the quarter. Daily average comps increased 2.5% in the third quarter, and comprised a 2.7% increase in daily average transaction size, partly offset by a 0.2% decrease in daily average transaction count. According to the company, the increase in net sales was primarily driven by retail price inflation, customers' response to pandemic trends, marketing initiatives, promotional campaigns and increased engagement in the{N}power customer loyalty program.

During the third quarter’s record-breaking inflation, Natural Grocers touted its flexible smaller-store format for its ability to continue to offer high-quality natural and organic products at Always Affordable prices for shoppers.

"We work hard to generate long-term relationships with vendors and farmers to secure the best possible pricing on wholesome natural foods and supplements. These types of partnerships have historically helped us to maintain premium quality and offer accessibly priced nutritious foods and vitamins, even when families have been impacted by inflation," noted Heather Isely, Natural Grocers' EVP.

In regard to gross profit, the retailer's third quarter of fiscal 2022 saw a 2.8% increase to $73.6 million, driven by increased sales volume. Gross profit reflects earnings after product and occupancy expenses. Gross margin decreased 10 basis points to 27.6% during the third quarter, compared with the third quarter of fiscal 2021. The decrease in gross margin was primarily driven by lower product margin attributed to higher freight, distribution and shrink expenses, partly offset by store occupancy leverage.

During its nationwide hiring push for almost 500 positions in July, the company said it had increased wages at all locations for select positions to attract candidates. Natural Grocers' pay is above federal and state minimum wage levels for all employees and includes regularly scheduled (annual) pay increases for all employees and no pay caps for store workers who wish to stay in their current positions.

As of June 30, the company had $19.9 million in cash and cash equivalents, no outstanding borrowings on its $50.0 million revolving credit facility, and $17.7 million outstanding on its term loan facility.

"We are pleased with our results in the third quarter, which were in line with our expectations," said Kemper Isely, co-president. "Consumers continue to be drawn to the quality and value of our offering, along with our convenient shopping experience, making us a leading destination for natural and organic products in our markets. Since the third quarter of fiscal 2019, our daily average comparable-store sales have increased 14.1% and diluted earnings per share have grown 88.9%, underscoring the strength of our differentiated model as well as our emphasis on operational excellence. We remain confident in our fiscal 2022 outlook and continue to focus on driving profitable growth and enhancing shareholder value."

The company is refining its fiscal 2022 outlook based upon year-to-date performance and current trends, as well as the uncertainty of the pandemic, and economic and inflationary factors. Natural Grocers now expects the following:

During the third quarter of fiscal 2022, Natural Grocers opened one new store in Colorado, ending the quarter with 162 stores in 20 states. Since June 30, the company has opened one new store, in Sioux Falls, S.D., – its first in the state. As of Aug. 4, the grocer has signed leases for an additional five new stores planned to open in fiscal years 2022 and beyond.

Lakewood, Colo.-based Natural Grocers is No. 95 on The PG 100, Progressive Grocer’s 2022 list of the top food and consumables retailers in North America.