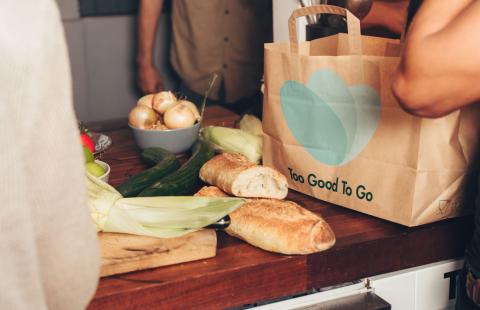 When participating grocers have soon-to-expire or extra food, they bundle it into “surprise bags,” which are reserved by shoppers on the Too Good To Go mobile app.

United Natural Foods Inc. (UNFI) is helping independent grocers do their part to protect the environment by expanding its relationship with Too Good To Go, the innovative food waste reduction app and the business-to-consumer marketplace for surplus food. What began as a pilot program in UNFI’s Atlantic region has become one of the fastest-growing solutions offered by UNFI Professional Services, with the number of retailers offering the program nearly doubling after the first year.

Too Good To Go uses technology to connect people with businesses that have surplus food such as pastries, fresh produce, sushi and more. When participating grocers have soon-to-expire or extra food, they bundle it into “surprise bags,” which are reserved by shoppers on the Too Good To Go mobile app. The shopper is then given a time window to pick up the bag in a store. Consumers benefit by getting food at greatly discounted prices, and businesses benefit by reaching a new customer base while recovering the cost of food that would have otherwise ended up in a landfill.

Currently available to UNFI retailers in select cities across the United States, including New York, Chicago, San Francisco, and Portland, Ore., Too Good To Go plans to expand to additional cities in 2022 as part of its goal to help independent grocers take actionable steps to combat climate change and food insecurity.

“A core value underpinning UNFI’s ESG [environmental, social and governance] priorities is our long-standing commitment to doing what’s right for people and the planet while working to assure a safe and nutritious food supply for everyone,” said Matt Whitney, UNFI’s chief growth officer. “We embrace the opportunity to use our expertise, influence and scale to be a force for positive change within the food system, and we strive to help retailers implement simple solutions that make a real, lasting impact.”

In 2020, UNFI established goals to reduce food waste by 50% in its distribution centers by 2025, as well as eliminate all waste to landfills from distribution center operations by 2030. Now, the company is focused on making even bigger strides by bringing food loss and waste reduction tools like Too Good To Go to its network of approximately 30,000 independent grocery retailers and their shoppers.

“We are excited to work with UNFI to expand our ability to save more food by connecting our users with uneaten, extra products at independent retail stores,” said Tyler Simmons, head of U.S. key accounts at Too Good To Go, a certified B-Corp. company. “By working together, we can help ensure delicious food doesn’t go to waste. That's a big win for people, businesses and our planet.”

Founded in 2016, Copenhagen-based Too Good To Go has also partnered with several of the largest instant-needs grocers in the United States, among them Jokr, Gorillas, Reef Technology’s Lightspeed Market and Food Rocket. So far, the tech-for-good company has saved more than 133 million meals across 17 countries, which is the equivalent of 532 million pounds of food.

Green Zebra Grocery, a UNFI-supplied retailer in Portland, Ore., fills its Too Good To Go surprise bags with prepared food items as well as breads, dairy products and produce at the peak of freshness. Its mixed grocery bags offer $15 worth of food for only $4.99. Ninety-nine percent of users have given their experience an average of four out of five stars, highlighting Green Zebra’s friendly staff, tremendous value and large amount of food.

“Our customers love getting fresh, healthy food at drastically reduced pricing through the Too Good To Go program, and we feel good about reducing food waste,” said Lisa Sedlar, founder and CEO of Green Zebra Grocery. “The more natural and organic food that gets consumed by our community members, the better!”

In March, UNFI released its fiscal year “2021 Better for All” report, which covers UNFI’s progress toward its ESG commitments, including waste reduction. The report takes a more holistic view of the company’s value chain compared with previous editions and demonstrates accountability for the critical role that UNFI plays, given its position and scale, to drive change across the food industry.