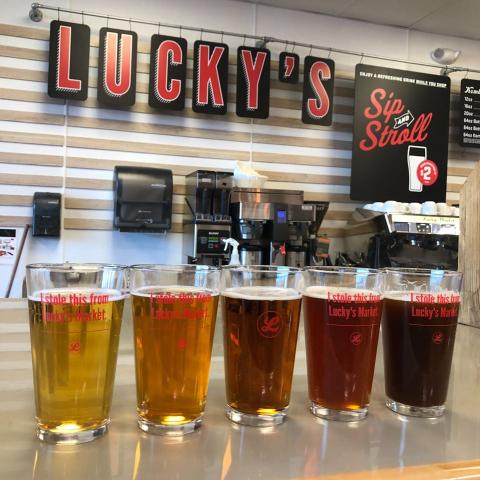 Lucky's Sip and Stroll was a popular feature of the now bankrupt grocer, which wants to sell off most of its stores

Lucky’s Market racked up a debt of more than $301 million to The Kroger Co., resulting in the former's recent Chapter 11 filing, according to a published report citing documents filed in U.S. Bankruptcy Court in Delaware.

After Kroger invested in the Niwot, Colo.-based organic and natural food retailer in April 2016, Lucky’s increased from 17 stores to 39 at the time it filed for bankruptcy, in the wake of Kroger's December 2019 divestment, with another 19 stores in the pipeline, reported the Daily Camera, a newspaper in Boulder, Colo.

In September 2016, Kroger provided Lucky’s with a secured loan of $23.3 million, followed by a $25.2 million loan in August 2017. Later that year, the companies “entered into agreements subsequently to, among other things, lend [Lucky’s] additional amounts over time,” according to an affidavit fromLucky’s CFO Andrew Pillari cited by the Camera. By the time Lucky’s filed for bankruptcy, it owed Kroger $301,156,450.

When Lucky’s filed for Chapter 11, it had $15 million in cash and cash equivalents on hand, $425 million in assets, and about $600 million in liabilities, the newspaper reported, adding that United Natural Foods Inc. and Caito Foods Service were among the company’s thousands of creditors.

When deciding which store locations to close or sell, the company looked at “current occupancy costs, historical store profitability, recent and projected sales trends, specific circumstances related to a store’s performance, current liquidity, and whether any firm offer for such store was obtained or likely available from third parties,” the Camera reported, adding that if the firm had not decided to close the 32 stores it identified, those locations would collectively generate about $30 million in operating losses this year alone.

According to the publication, Lucky’s officials have determined that the company would require another $100 million in financing to continue operations until it achieves positive cash flow. The grocer is also looking at paying out an estimated $3.2 million in severance to employees laid off due to store closures.

The origins of the company’s current woes date back to 2015, the Camera reported, citing the bankruptcy filing, which noted that at that time, Lucky’s “developed and sought to execute on a strategic growth plan, which included accelerated growth in new and existing markets, with a focus on developing stores in Florida. The company’s strategic growth plan required, among other things, significant upfront investment,” chiefly from Cincinnati-based Kroger, which employs nearly half a million associates who serve 9 million-plus customers daily through a seamless digital shopping experience and 2,769 retail food stores under a variety of banner names. The company is No. 2 on Progressive Grocer’s 2019 Super 50 list of the top grocers in the United States.

However, Lucky’s growth in the Sunshine State “coincided with, among other things, increased competition in the grocery industry, including expansions from competing chains such as Sprouts Farmers Market, Fresh Thyme Farmers Market and Earth Fare,” according to filings cited by the Camera. “As a result, notwithstanding the growth in sales, the portfolio of company stores was unable to achieve sustainable four-wall profitability.”

Meanwhile, in other Lucky’s news, Jacksonville, Fla.-based Southeastern Grocers, which operates such banners as Bi-Lo, Harveys and Winn-Dixie, and is No. 13 on PG’s Super 50 list, has expressed interest in purchasing Lucky’s locations in Florida, according to the Jacksonville Business Journal. Fellow Florida grocer Publix Super Markets (No. 5 on PG’s list), based in Lakeland, and Batavia, Ill.-based Aldi (No. 9) have already entered into asset purchase agreements with the beleaguered chain for Florida stores.