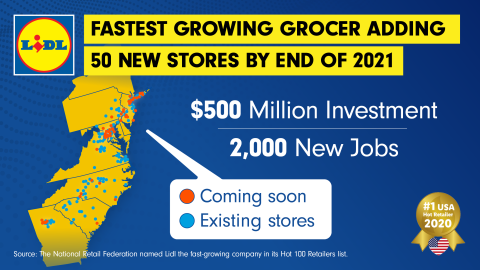 Lidl plans to open 50 new East Coast stores by the end of next year.

Lidl US has taken the wraps off plans to open 50 new stores by the end of 2021. The stores will be located in Delaware, Georgia, Maryland, New Jersey, New York, North Carolina, Pennsylvania, South Carolina and Virginia, bringing the grocer’s total number of U.S. stores to more than 150.

The $500 million-plus investment in the new stores is anticipated to create about 2,000 new jobs across these communities, according to Lidl, which offers such benefits as health care insurance for all full- and part-time employees.

As part of the deep discounter’s continuing strategy to prioritize its most convenient locations, it will close two stores in Havelock and Shelby, North Carolina. All employees at those locations will have the opportunity to relocate to another store within Lidl’s store network.

Lidl has touted its current U.S. success after an admittedly rocky start in this country. A recent UNC Kenan-Flagler Business School study commissioned by Lidl US showed the retailer’s prices to be up to 45% lower than those of nearby national grocers, making it an attractive proposition for bargain-hunting shoppers, while the National Retail Federation has identified Lidl as the top retailer in its Hot 100 Retailers ranking of fastest-growing companies.

Neckarsulm, Germany-based Lidl operates more than 11,000 stores in 32 countries, employing about 287,000 employees worldwide. In the United States, the Arlington, Virginia-based grocer has about 100 stores in nine East Coast states. The company is No. 96 on the PG 100, Progressive Grocer’s 2020 list of the top food and consumables retailers in North America.