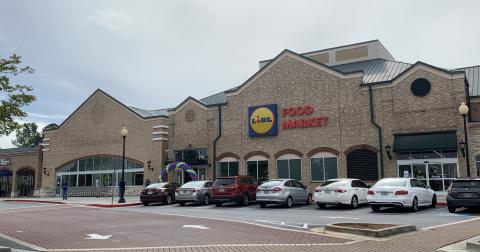 Freestanding stores may be Lidl’s preferred prototype, but the discount grocer has taken a new approach with its newest store in the northeastern Atlanta suburb of Peachtree Corners.

Lidl’s newest Atlanta area location occupies space in a neighborhood shopping center at 5270 Peachtree Parkway NW. The store opened on Wednesday, May 13, to little fanfare aside from an archway made of balloons positioned in front of the building. Customer traffic was limited to five customers per 1,000 square feet and a Lidl employee was stationed at the entrance to count customers, disinfect carts and serve as traffic controller. Other social distancing practices involved the placement of signage on the floor directing shoppers where to stand during checkout and in-store announcements that shoppers should maintain an adequate distance from one another.

Those have become standard retail practices in a COVID-19 world, but what made the opening noteworthy was Lidl’s choice of location as it speaks to an increasingly flexible approach to real estate in the U.S. market. Many of the locations the company opened shortly after arriving in the U.S. several years ago featured a signature design with an arched rood and large windows. That is the model employed at Lidl’s three other locations located on the outskirts of Atlanta. However, the newest location in Norcross occupies a space formerly leased to the now defunct Earth Fare natural and organic chain and is adjacent to a Tuesday Morning store in a neighborhood shopping center.

Lidl’s fifth location in Georgia in the town of Augusta is also a freestanding store and located less than a half mile from the Augusta National Golf Club where The Masters golf tournament is played annually.

“Whether in rural areas, on the outskirts of town or in dense city centers, there can be many challenges to store development. Thanks to the diversity of our store concepts, we can offer the right solution for every location,” is how the company describes its approach to determining the suitability of a location.

The retailer’s freestanding stores are typically in the 25,000 to 36,000 square foot range, but when it comes to locations in shopping centers the low end of the square footage range drops to 20,000 square feet. The reduced size gives Lidl greater flexibility to capitalize on real estate opportunities that could open up in the years ahead as distressed retailers are forced to close stores in the east coast trading areas where Lidl is currently focused.

Looking specifically at Atlanta, Lidl clearly has big things planned for the metro area and beyond. In January, the southeastern Atlanta suburb of Covington was revealed as the location of Lidl’s fourth U.S. distribution center although an opening date for the $100 million, 925,000-square foot facility has not been disclosed.

In addition to freestanding stores and inline locations in shopping centers, Lidl has also shown it is willing to pursue acquisitions as a faster path to growth. It acquired 27 Best Market stores in late 2018 located in New Jersey and New York’s Long Island. At the time it only had about 50 U.S. location. With that deal Lidl put the retail real estate community on notice that it would consider acquiring multi-store portfolios as part of its expansion strategy.

Take a look inside Lidl's newest store, see below...