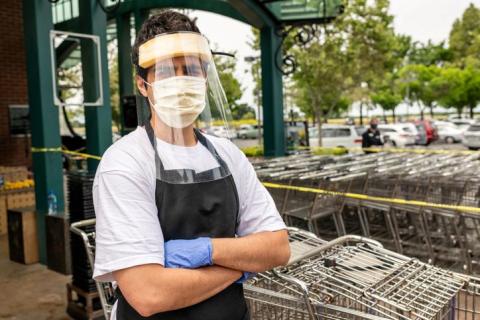 The Cincinnati-Dayton division is investing $159 million in wages throughout the five-year agreement. Depending on classification and date of hire, pay will increase by $4.78 per hour during the contract term. By the end of this contract cycle, the average hourly wage for an associate in the Cincinnati-Dayton division will be nearly $20 per hour, not including benefits like health care and pension.

"Kroger has invested more than $800 million in permanent wage increases in the last three years and is committed to continuing to invest significantly in our associates' pay in 2021," said Tim Massa, Kroger's SVP and chief people officer. "Kroger is a place where you can come for a job and stay for a career. A key driver for Kroger is talent development, and we are committed to investing in our associates."

"After a year of uncertainty and sacrifice due to the COVID-19 pandemic, UFCW Local 75 is pleased to have a five-year agreement with Kroger that establishes security and stability for our members, increases wages, improves contract language and maintains affordable health care," said Kevin Garvey, president of Dayton-based UFCW Local 75. "Our member bargaining committee strived to negotiate a labor agreement that provides a voice for our members on the job. This agreement provides that for 20,000 members in our communities."

"We are pleased to reach an agreement that supports our associates and our company," said Scott Hays, president of Kroger's Cincinnati-Dayton division. "This new contract provides significant pay increases, affordable health care and continued investments in our associates' pension fund. This agreement comes after thoughtful and productive work by both the company and union bargaining committees."

The ratified labor agreement comes a week after Kroger reached an agreement with local unions about future pension benefits for associates. Certain associates within the Fred Meyer and QFC divisions ratified an agreement with four local unions for the transfer of liabilities from the Sound Retirement Trust to the UFCW Consolidated Pension Plan. This new arrangement will help secure the pension benefits of more than 10,600 Kroger associates, and is expected to minimize the organization's exposure to market risk going forward, while also reducing administrative costs.

Kroger will transfer approximately $400 million in net accrued pension liabilities, on a pre-tax basis, to fulfill obligations for past service for associates and retirees from the Sound Retirement Trust to the UFCW Consolidated Pension Plan.

"I am delighted we have reached an agreement to address the underfunding of the Sound Retirement Trust, which is ineligible for relief under the Emergency Pension Plan Relief Act of 2021. This agreement is a great outcome for our associates, as it better protects previously earned benefits and will stabilize future benefits," said Gary Millerchip, Kroger's CFO.

Cincinnati-based Kroger employs nearly half a million associates who serve 9 million-plus customers daily through a digital shopping experience and almost 2,800 retail food stores under a variety of banner names. The company is No. 3 on The PG 100, Progressive Grocer’s 2021 list of the top food and consumables retailers in North America.