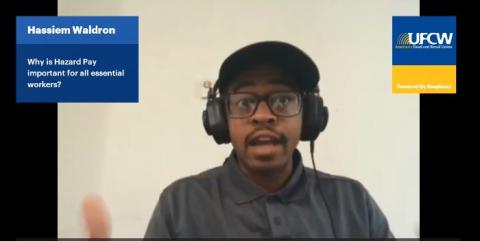 Albertsons employee and UFCW member Hassiem Waldron talks on the union's website about why hazard pay is important for all essential workers.

In the first phase of the campaign, at least 26 worker actions are planned this week at grocery stores and other essential businesses across the United States in California, Texas, Georgia, Virginia, Colorado, Washington, Tennessee, Maryland, West Virginia, and other states hit hard by the virus. The campaign will include grass-roots actions in addition targeted paid and digital media to highlight the serious health threats faced by workers. UFCW will also connect customers and communities with essential workers, in the form of first-person testimonials, to put pressure on businesses to guarantee hazard pay for as long as the COVID-19 pandemic lasts.

“America’s grocery workers are putting their lives on the line every day that they walk into the store, because this pandemic is far from over and the health threats are just as real now as they were when this crisis began,” noted Marc Perrone, president of Washington, D.C.-based UFCW International, which represents 1.3 million workers in the health care, grocery, meatpacking, food-processing, retail and other industries. “It is outrageous that the CEOs of these companies refuse to restore hazard pay even as more of these workers are getting sick and dying every week. Hazard pay for grocery workers must be reinstated now.”

This past week, according to the union, there have been at least 103 grocery worker deaths from the coronavirus, and more than 14,300 employees infected by or exposed to COVID-19.

The movement took off when Albertsons, Kroger, Ahold Delhaize’s Stop & Shop, and others began discontinuing extra pay for workers.