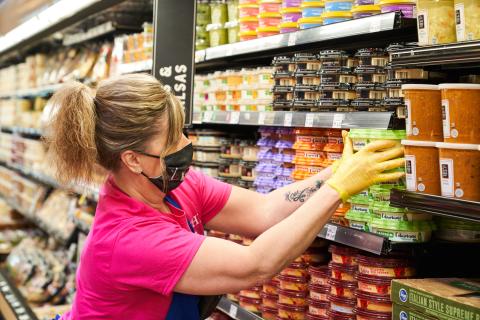 A new five-year national contract that promises improvements to wages, benefits and working conditions has been ratified by Teamsters at Kroger. The master agreement, which was voted on by 88% of members, covers more than 1,500 Kroger workers nationwide.

"The strength of this agreement is a direct result of locals working together and putting members first,” said Tom Erickson, director of the Teamsters Warehouse Division. “Thanks to coordinated bargaining as well as the input and participation of rank-and-file members, we were able to win the most lucrative deal in the history of the national contract at Kroger.”

"After months of hard-fought bargaining, we're so excited to announce that we have ratified a new contract that will improve the working conditions of all Kroger Teamsters and put more money in workers' pockets," said Aaron Washington, an order selector at Kroger and union steward for Teamsters Local 667 in Memphis, who took part in negotiations. "It wasn't an easy process, but we remained strong throughout negotiations and stuck together, and that's why we have this win today."

"We are proving again and again that when locals and members are united at the table, we have the ability to win record-breaking contracts and make gains across the board," said Erickson. "I want to thank lead negotiators Terry Constant, Jeff Sperring, and Todd Lince along with all the other local leaders who helped build solidarity throughout the bargaining process and every member who stayed engaged and took part in negotiations."

In October, Kroger union workers in Central Ohio ratified a new contract late last week, averting a potential strike, according to local reports. The United Food and Commercial Workers International Union (UFCW) Local 1059, which represents about 12,500 members across 82 stores, approved the contract by a vote of 3,546 to 3,193.

Serving more than 9 million customers daily through a digital shopping experience and 2,800 retail food stores under a variety of banner names, Cincinnati-based Kroger is No. 4 on The PG 100, Progressive Grocer’s 2022 list of the top food and consumables retailers in North America.