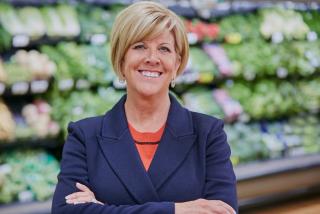 The Kroger Co. has named Lori Raya president of its Mid-Atlantic division. Raya succeeds Paula Ginnett, who has been promoted to group VP, retail operations at Kroger’s corporate headquarters in Cincinnati.

“Lori is a respected leader within the grocery retail industry, and her perspective will be a valued addition to the Mid-Atlantic division. She is a people-first leader who will build on the success of Paula and the division team to continue deliver a full, fresh and friendly experience to every customer,” said Valerie Jabbar, who was recently promoted to the role of SVP of retail divisions. “We are so grateful for the leadership that Paula has shown over the past two years, and we are pleased to know that we’ll continue to benefit from her experience as she transitions to a new role with the company.”

Raya is an active and dedicated member of her community, with particular interest in hunger initiatives, youth education and sport. Progressive Grocer named Raya aTop Woman in Grocery an impressive seven times from 2010 through 2017, and in the latter year, she received the publication’s prestigious Trailblazer award and was inducted into the Top Women in Grocery Hall of Fame. Raya and her husband, Sam, will be relocating to the Richmond, Va., area to be closer to  division headquarters.

“I’m thrilled to be the new president of Kroger’s Mid-Atlantic division, and I can’t wait to work with the talented and passionate team of associates that proudly serves our customers,” said Raya. “One of the things that drew me to Kroger was its focus on supporting communities, and I am looking forward to getting involved and making a difference in Richmond and the other communities Kroger serves throughout our Mid-Atlantic division.”

The Kroger Co. employs nearly half a million associates who serve 11 million-plus customers daily through a digital shopping experience and almost 2,800 retail food stores under a variety of banner names. The company is No. 3 on The PG 100, Progressive Grocer’s 2021 list of the top food and consumables retailers in North America. SpartanNash is No. 39 and Albertsons is No. 8 on PG's list.