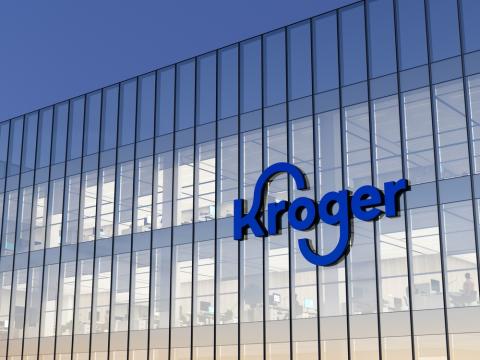 To properly sort through the debate over The Kroger Co.’s proposed merger with the Albertsons Cos., it helps to travel back in time to 1999.

That year, Rodney McMullen was CFO at Kroger, leading a $13 billion acquisition of Fred Meyer, a mass-market chain founded in 1922 in Oregon. The deal created the giant supermarket chain we know today as Kroger, with 2,800 stores in 35 states.

At the time, analysts said that the combined businesses would create a “too powerful” company that could hurt shoppers and workers alike. Other experts said that such a merger would make it tough for independent grocers to compete on price, marketing and real estate.

What actually happened? As McMullen told CNBC in October, shortly after the $24.6 billion Kroger-Albertsons merger news broke: “Several years ago, we merged with Fred Meyer, and Fred Meyer has been an awesome merger, and if you look at some of the things that Fred Meyer had with the marketplace store and that, we’ve been able to scale it across all Kroger.”

McMullen is no stranger to taking big risks, whether it’s multibillion-dollar mergers or investing billions in digital grocery by opening robotic fulfillment centers in places where the company has few or no stores.

Yes, there were some layoffs as a result of the Fred Meyer transaction, but there were also a lot of price cuts, investments in technology, loyalty program innovation and other actions that helped Kroger compete better with Walmart and other food retailers. Kroger’s sales surged in the following years.

Today, the grocery industry is bogged down by skyrocketing costs, shrinking margins and a new business model predicated on the notion that e-commerce will be profitable — eventually. According to Euromonitor, 25.2% of all dollars spent on groceries in the United States last year went to Walmart, while Kroger got 8.1% and Albertsons 4.8%. Numerator puts Walmart’s share at 21% and Kroger’s at 10%.

In an interview with Reuters in October, McMullen said that the savings provided by the deal would allow the chains to cut prices for consumers. He cited $500 million of “cost savings from synergies” that the new entity could use to lower prices. McMullen added that the combined entity could better compete head-to-head with “larger, non-union” grocers.

To continue to compete against Walmart and now players such as Amazon, grocers also need better buying power and more capital to invest in things like retail media, private brands and more fulfillment centers. A big part of the Kroger-Albertsons deal is about creating a truly national retail media network that can compete with Walmart, Amazon and Google for ad revenue.

Another benefit for Kroger is it gets Albertsons’ seven micro-fulfillment centers to complement the total of 17 customer fulfillment centers (CFCs) that it plans to open within the next couple of years. In revealing the deal on Oct. 14, Kroger CFO Gary Millerchip said that the retailer expects to save about $1 billion a year in costs as a result of the merger.

Of course, it remains to be seen whether the merger will pass regulatory muster amid questions about geographical overlap, store divestitures, union objections, and whether pressures related to competition and inflation are even enough to warrant such a transaction. I know, however, that Rodney McMullen has done his homework. If the deal closes as expected in early 2024, the merger would make Kroger a $200 billion company with more than 5,000 stores, 700,000 workers, and an instant footprint in the Northeast.

The Kroger-Albertsons merger will no doubt overhaul the competitive landscape in the $811.5 billion grocery market. And the way things are going with the economy, it’ll be only the beginning of a wave of consolidation-related transformation in the industry.