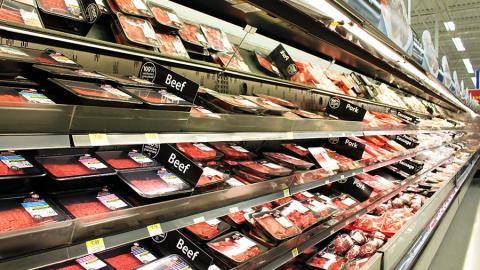 The Kroger Co. has confirmed a report that it has placed purchase limits on ground beef and fresh pork at select stores, although it declined to give additional details.

“At Kroger, we feel good about our ability to maintain a broad assortment of meat and seafood for our customers because we purchase protein from a diverse network of suppliers,” a company spokesperson replied when contacted by Progressive Grocer. “There is plenty of protein in the supply chain; however, some processors are experiencing challenges.”

Meanwhile, a local Southern California news outlet reported that Albertsons and its Vons and Pavilions banners had, in the words of a company spokesperson, “implemented a temporary limit of two packages per household on select meat items. Customer purchases will be limited to two packages of beef, chicken, and pork (this means they can purchase up to six packages of meat – two per commodity). We are not experiencing and do not anticipate any issues with supply or product availability. We did so to prevent panic buying and to ensure more of our customers can find the products they need.”

Among other grocers making similar moves is Stop & Shop, which has implemented a two-package-per-customer limit on meat, according to a company spokeswoman quoted in Rhode Island's Providence Journal. The spokeswoman added that it was a precautionary measure “to ensure that meat is available for as many customers as possible.”

This state of affairs was predicted by Smithfield Foods CEO Kenneth M Sullivan, who warned last month that the United States was “perilously close to the edge in terms of our meat supply” after the shutdown of the company’s large Sioux Falls, S.D., pork-processing facility after workers tested positive for COVID-19 – one of several protein plants, including facilities operated by Tyson and JBS USA, to have shut down amid the pandemic.

“It is impossible to keep our grocery stores stocked if our plants are not running,” admitted Sullivan. “These facility closures will also have severe, perhaps disastrous, repercussions for many in the supply chain.”

Further, this situation at retail comes at a time of increased demand, with more people preparing meals at home. According to Chicago-based IRI (Information Resources Inc.), sales of meat increased 91% during the week ended March 22 as Americans stuck at home changed meal time behaviors and caused retailers to impose quantity limits. Volume sales were up 78%. In absolute dollars, the five biggest winners for the week of March 22 were ground beef ($180 million more versus the comparable week in 2019), chicken breasts ($75 million), pork loin ($40 million), beef short loin (nearly $40 million) and beef chuck ($35 million), according to IRI.

Cincinnati-based Kroger employs nearly half a million associates who serve 9 million-plus customers daily through a seamless digital shopping experience and 2,769 retail food stores under a variety of banner names. The company is No. 2 on PG’s 2019 Super 50 list of the top grocers in the United States.Boise, Idaho-based Albertsons Cos.operates stores across 35 states and the District of Columbia under 20 well-known banners, including Albertsons, Safeway, Vons, Jewel-Osco, Shaw’s, Acme, Tom Thumb, Randalls, United Supermarkets, Pavilions, Star Market, Haggen and Carrs, as well as meal-kit company Plated. The company is No. 3 on the2019 Super 50 list. Quincy, Mass.-based Stop & Shop employs nearly 60,000 associates and operates more than 400 stores in Massachusetts, Connecticut, Rhode Island, New York and New Jersey. Parent company Ahold Delhaize USA is No. 4 on the list.