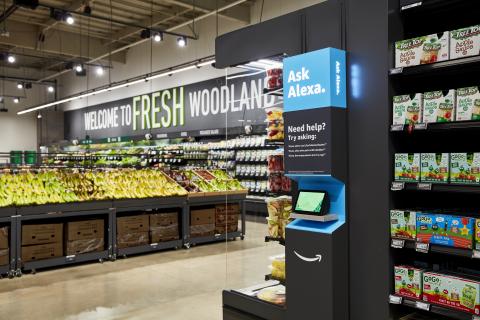 Amazon is expanding its partnership with department store chain Kohl's in a big, new way.

The Milwaukee Business Journal is reporting that Kohl’s will allow an Amazon grocery store, likely its new banner called Fresh, to occupy space in a Kohl's store in La Verne, California. According to city records, Kohl’s would occupy about 50,900 square feet of the 88,000-square-foot box, with the Amazon grocery store filling the remainder.

The proposed store at 2229 Foothill Boulevard would share building space with an existing Kohl’s. It's one of a handful of Amazon grocery stores under development in the region, including locations in Irvine, Woodland Hills and North Hollywood. The approximately 37,000-square-foot grocery store will be separated by a wall connecting to the existing Kohl’s next door, Assistant City Planner Maia McCurley told the (La Verne, California) Daily Bulletin. There's no timetable yet for when the store would open, McCurley said.

Since 2017, Kohl's has been reducing selling space in some stores by teaming up with ALDI, Planet Fitness, and other companies. The moves are meant to increase traffic to Kohl's stores and to make the (smaller) stores more operationally efficient.

Kohl's has had a relationship with Amazon since 2019, when the retailer began accepting Amazon returns at its more than 1,100 stores. Kohl's said at the time that it expects the program to benefit millions of shoppers, as well as bring more people into its stores.

In 2018, Kohl's announced a partnership in which deep-discount grocery store chain Aldi would open at least 10 stores in Kohl's locations around the country.

As for Amazon, this new development with Kohl's offers the retail giant a fast and easy way to grow its grocery footprint. Amazon currently has several physical grocery banners, including Whole Foods Market, Amazon Go, Amazon Go Grocery, and Amazon Fresh. The company is also planning grocery stores in the Chicago; Washington, D.C.; and Philadelphia markets, according to media reports.

Seattle-based Amazon is No. 2 on Progressive Grocer’s 2020 PG 100 list of the top food and consumables retailers in North America. Austin, Texas-based Whole Foods is No. 24 on PG's list, while Batavia, Illinois-based Aldi U.S. is No. 26.

For a detailed look inside the Amazon Fresh banner, click here.