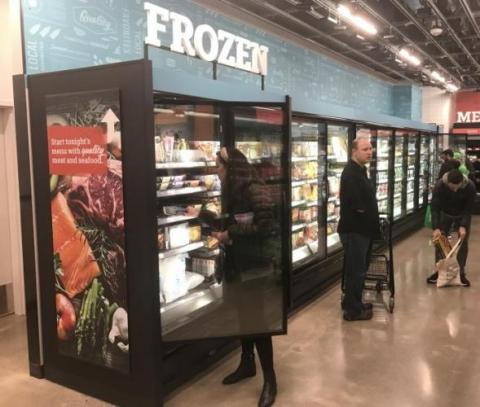 The beat goes on for Amazon’s food retail push and the general shift toward grocery transactions that require no checkout clerks.

A report from the Seattle Times newspaper said that the e-commerce and food retail operator plans to open new grocery locations in “Seattle, California, and the Chicago and Washington, D.C., areas.”

Some of the new stores will reportedly feature conventional checkout experiences.

According to an Amazon website, however, a new Amazon Go store planned for Redmond, Wash., in the Seattle area, will apparently have cashierless checkout technology.

“Never wait in line to check out again,” Amazon teases on that website. The company offered no immediate comment . Such a checkout-free process relies on sensors such as cameras to determine what consumers are putting into their baskets and buying, charging shoppers’ payment accounts without the need for cashiers.

The Redmond store, according to the newspaper report, will occupy “what was formerly a Sears automotive building in Redmond near its border with Bellevue, where it is also adding corporate offices. Amazon opened its first Go Grocery on Capitol Hill in Seattle this year after a lengthy development period, its latest move in an ongoing effort to capture more of consumers’ grocery budget.”

As of July 6, Amazon had 186 open positions listed for its Amazon Go operations, with the greatest concentration of jobs — 76 — involving software development, and most of the jobs based in Seattle.