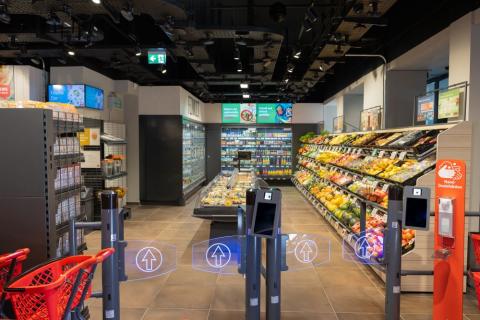 While Amazon Just Walk Out is at the forefront of frictionless checkout technology in the United States, another tech provider of computer vision solutions is gaining ground in Europe.

In the initial phase, the REWE store on Schönhauser Allee in Berlin’s popular Prenzlauer Berg neighborhood is allowing employees and loyalty card shoppers to walk into the store, select their items and simply walk out – without having to queue at the checkout lane or scan any items.

The move comes one year after Trigo and Rewe launched Europe’s first hybrid autonomous grocery store in downtown Cologne with a checkout-free experience. Besides being twice the size of the Cologne store, at 400 square meters (approximately 4,300 square feet), the Berlin location will feature weighted items for the first time – customers no longer have to buy per unit; they can purchase their fruits and vegetables by weight. While the Cologne store had the on-the-go convenience shopper in mind, the Berlin store has the weekly shopper in mind, with a larger basket size, including bulk purchases.

The Berlin store is scheduled to open to the wider public in late summer. Regular checkout will still be available for shoppers who prefer traditional checkout.

“Trigo is immensely proud and honored to be rolling out its frictionless grocery shopping technology with Rewe, one of the world’s biggest and most innovative grocery retailers,” said Michael Gabay, co-founder and CEO of Tel-Aviv based Trigo. “Rewe have placed their trust in Trigo’s privacy-by-design architecture, and we look forward to bringing this exciting technology to German grocery shoppers.”

Rewe Group operates some 6,000 stores in Germany and 3,500 internationally.

Trigo, which has offices in London and New York, has implemented its technology stores for Aldi Nord in the Netherlands, Tesco in the United Kingdom, and Netto Marken-Discount, in Munich, Germany.

The company marked its first foray into the United States earlier this year, when it teamed with Wakefern Food Corp., the largest retailer-owned cooperative in the country. Trigo’s partnership with Wakefern includes a pilot of an autonomous supermarket in New Jersey.

“Our consumers are sophisticated, and they have come to expect better service in terms of payments, automation and self-checkout,” said Xavier Amar, administration and finance manager at El Trébol. “Our chain of stores initially focused on small towns within our region. As we grew, we saw the need to improve our standards and quality because we were competing with larger, more established supermarket chains. The new self-checkout system is now a standard and preferred option for our shoppers, and the response has been very positive.”

The Chilean supermarket company continues to implement the technology across its chain of 30 stores, with new openings planned in the Los Lagos region and prospects for future stores featuring a higher density of self-checkout lanes, or possibly all self-checkout lane stores.