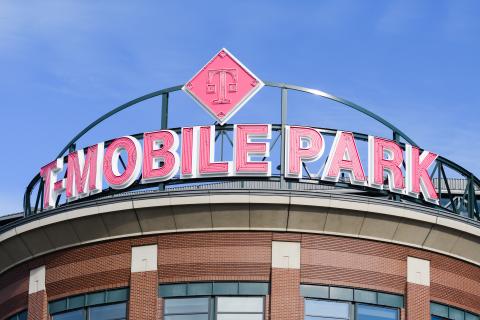 Amazon's Just Walk Out and Amazon One technologies will be featured at T-Mobile Park’s new Walk-Off Market, which is designed to eliminate lines and allow Seattle Mariners fans to spend more time watching the games.

The Seattle Mariners and hospitality partner Sodexo Live! will open Major League Baseball (MLB)’s first-ever contactless market to be powered by Amazon’s Just Walk Out and Amazon One technology.

Both frictionless retail technologies will be featured at T-Mobile Park’s new Walk-Off Market, which is designed to eliminate lines and allow fans to spend more time watching the games. The Walk-Off Market will offer customers a variety of Coca-Cola products, grab-and-go snacks, hot dogs, nachos and soft pretzels, and a wide selection of beer, Northwest wines and ready-to-drink cocktails, as well as Mariners-branded merchandise.

“The Walk-Off Market is built for speed,” said Catie Griggs, Seattle Mariners president of business operations. “From the menu offerings to the store’s layout to Amazon’s Just Walk Out technology, everything is designed to offer fans what they want and get them back to the game as quickly as possible. We are excited to join with our hospitality partner Sodexo Live! to bring these groundbreaking technologies to T-Mobile Park and do an even better job of serving our fans.”

Similar to how Instacart launched the new Caper Counter at Boston’s Fenway Park, Amazon’s technology will allow fans to benefit from an effortless shopping experience by giving them the ability to insert a credit card at the entry gate or hover their palm over an Amazon One device to enter, shop and then leave. The credit card they inserted or linked to their Amazon One ID will be charged for the items they took after they leave the store.

Shoppers will be required to show photo ID to an attendant when purchasing alcohol. If a fan is new to using the Amazon One palm recognition service, they can enroll in less than a minute at any of the three enrollment kiosks just outside the store.

“We’re excited to work with Amazon to make T-Mobile Park the first ballpark to feature both Just Walk Out technology and Amazon One in the same store,” said Steve Pangburn, CEO of Gaithersburg, Md.-based Sodexo Live! “The next-gen technology is sure to reduce lines and be a hit with fans, and we’re excited to deploy it at Mariners games this season.”

Amazon’s Just Walk Out Shopping experience is made possible by the same types of technologies used in self-driving cars, computer vision, sensor fusion and deep learning. The Walk-Off Market is slated to open this summer near Section 126 on the ballpark’s Main Level.

At other sports venues, the e-tailer has collaborated with the Houston Astros to bring Just Walk Out to two food and beverage stores at Minute Maid Park, and the technology has also just debuted at two food and beverage stores at UBS Arena, home of the NHL’s New York Islanders. Meanwhile, Amazon One recently debuted at a Whole Foods Market store in Austin, Texas, with plans to expand to the banner’s other stores in the area.

Seattle-based Amazon is No. 2 on Progressive Grocer’s 2021 list of the top food and consumables retailers in North America, while Austin, Texas-based Whole Foods, a wholly owned subsidiary of Amazon, is No. 26 on PG’s list.