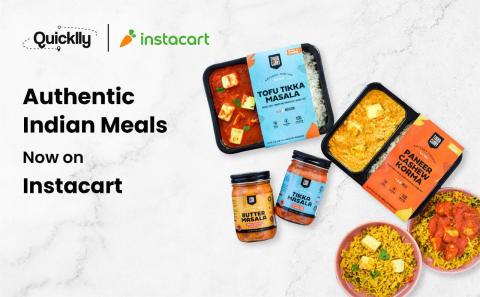 Reflecting growing supplier diversity within the industry and consumers’ shifting palates, the Indian and South Asian marketplace Quicklly is working with Instacart to introduce nationwide delivery of ready-to-eat meal kits.

The meal kits, featuring an array of Indian dishes, can be delivered within three to four days without a subscription. The offerings include items such as tikka masala kits, vegetable biryani, vindaloo sauces, dal tadka and rotis, among others.

This is the first of two planned collaborations between Quicklly and Instacart. During the second phase expected to launch later this year, the companies will pair to provide local grocery delivery of Indian pantry staples including spices and sauces.

"As the grocery shopping experience has become increasingly digitized, many consumers of Indian and South Asian food and the mom-and-pop stores that source them have been left behind," explained Keval Raj, Quicklly’s co-founder. "We created Quicklly to help close that digital divide and increase access to premium South Asian groceries. Today's announcement is another major step towards our team's goal of continually innovating, with our customers at the center."

The meal kits can be ordered through the Quicklly storefront on the Instacart mobile app and website. Founded in 2017, Quicklly also provides a full digital presence for local businesses, connecting them to customers across Greater Chicago, New York, New Jersey, San Francisco, the Bay Area, and other locations around the country.

Instacart, for its part, continues to ramp up its meal solutions to consumers as they adjust to their evolving lifestyles. In January, the platform introduced its Ready Meals delivery service, through which shoppers can order prepared foods and ready-made meals from groceries via a new hub on the Instacart app.