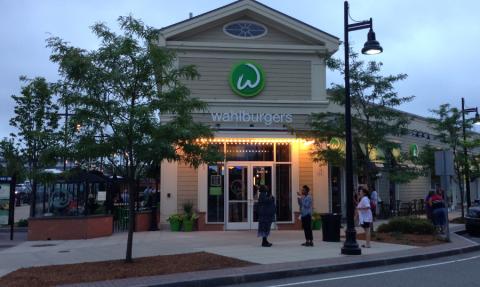 A Wahlburgers restaurant in Hingham, Mass.

Hy-Vee Inc. is bringing the Wahlburgers name to Wisconsin, opening its fourth franchise of the burger joint in Brookfield – the first location in the state.

Set to open in the early summer, the 6,000-square-foot restaurant will be located on the northeast side of the center and provide a "unique dining experience" with signature burgers; homestyle sides; beefless options such as fish, chicken and vegetarian; and a full bar with specialty drinks such as adult frappes and floats. Menu items are made with from-scratch recipes.

Hy-Vee first announced its franchising partnership with Wahlburgers in August 2017, when it said it planned to build, own and operate 26 locations under the name. Its first three Wahlburgers locations opened in 2018 at Mall of America in Bloomington, Minnesota; West Des Moines, Iowa; and Olathe, Kansas.

Grand Rapids, Mich.-based mass-merchandiser Meijer also announced in 2017 that it has teamed with the Hingham, Mass.-based burger chain to open franchised locations in its home state.

"Hy-Vee is excited to open its fourth Wahlburgers location, and to bring a new dining experience to Wisconsin," said Randy Edeker, chairman, CEO and president of Hy-Vee. "Families will enjoy great food in a fun atmosphere, served with the excellent customer service and hospitality that Hy-Vee and Wahlburgers are known for."

West Des Moines-based Hy-Vee Inc. operates more than 245 retail stores across eight Midwestern states and has more than 80,000 associates. It ranks 15th on Progressive Grocer’s 2018 Super 50 list of the top grocers in the United States.