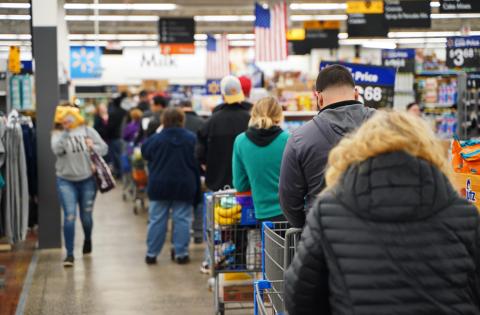 While many stores started promotions earlier and store traffic varied, Black Friday was deemed "solid" by some experts.

Although the seasonal run-up has started earlier in recent times, Black Friday remains a traditional harbinger of the holidays. By the looks of this year’s in-person and online shopping event, retailers can take heart that shoppers showed up and spent, even at a time of frequent talk about a looming economic downturn.

Commercial real estate company CBRE Group, Inc. reported a “solid” weekend on Black Friday and Small Business Saturday. Staff at 13 CBRE Retail Property Management malls revealed that traffic was up slightly compared to 2021, even as they kicked off promotions earlier in 2022.

Coresight Research sent researchers out to 14 locations around the U.S. and Canada on Black Friday to canvas more than 45 retailers, including Target and Walmart stores. According to the firm’s follow-up report, shopper turnout seemed solid despite varied traffic and the easy accessibility of online buying, while the in-stock situation was much better than last year. “Although some shelves were picked over, retailers seemed to offer plenty of merchandise, underscoring a healthy amount of inventory and a willingness by retailers to offer deals for consumers,” the report concluded.

Meanwhile, Placer.ai, which specializes in location intelligence and foot traffic insights, delved into performance by store type and found that many of the big box retailers were off on a year-over-year basis on Black Friday. Costco Wholesale visits were down 5.6% compared to 2021, while BJ’s Wholesale Club dipped 4.6%, Sam’s Club slid 1.5%, Walmart dropped 5.3% and Target declined 2.0%. That said, those stores still turned in stronger traffic versus other weeks and months of 2022. For example, although Target’s visits decreased 2% on a year-over-year basis, they were up 153.4% over the first three weeks of November and 154.3% higher compared to the first quarter through third quarter daily average in 2022.

“Even compared to a Black Friday in 2021 that was limited by rising COVID cases, and an active effort by retailers to shift focus away from the retail holiday, brick-and-mortar visits were down nearly across the board. The data serves as the latest indication of the ongoing decline of Black Friday’s centrality. Nonetheless, the day did still drive a massive surge in visits with some retailers seeing increases of 300% or more on the average daily visits in November in the weeks leading up to Thanksgiving,” observed Ethan Chernofsky, VP of marketing at Placer.ai, adding, “This shows that while Black Friday may not possess the draw it had in years past, it still retains a unique ability to drive urgency among consumers."

Some of that urgency seems to have come from seeking out deals as much as checking items off a gift-giving list. In its recap of the Thanksgiving weekend push, CBRE reported that heavy discounts helped drive traffic, and retailers that offered the biggest sales consistently had lines outside of their stores. “Price inflation will remain a headwind for shoppers this season, so it’s likely that discounts will play a sustained role in generating interest this season,” said Brandon Isner, CBRE Americas’ head of retail research.

As for e-commerce during a year in which many people returned to brick-and-mortar stores, the digital channel also came in relatively robust. According to new data from Adobe’s analytics group, online stores racked up $35.27 billion during “Cyber Week” that stretched from Thanksgiving to Cyber Monday, a 4.4% lift from last year. Adobe also reported record online spending on Black Friday, with $9.12 billion in sales.

“With oversupply and a softening consumer spending environment, retailers made the right call this season to drive demand through heavy discounting,” asserted Vivek Pandya, lead analyst for Adobe Digital Insights. “It spurred online spending to levels that were higher than expected, and reinforced e-commerce as a major channel to drive volume and capture consumer interest."