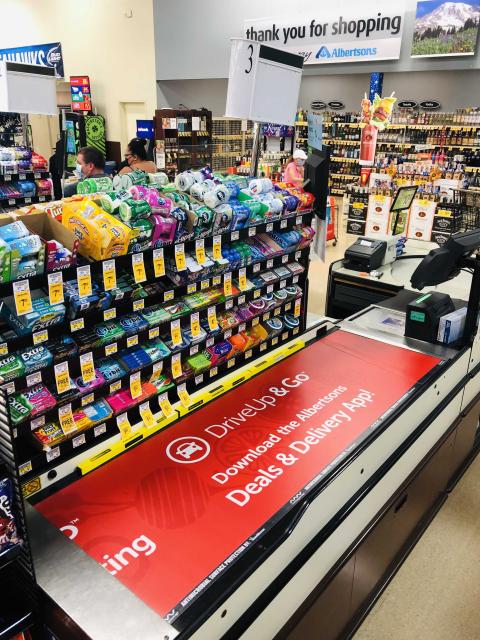 Self-aligning conveyor belt covers from MessageWrap are in place at more than 1,000 Albertsons stores around the country as a communications platform.

Sales may be a moving target, but grocers can leverage continually-moving conveyor belts for greater engagement and promotions. Handstand Innovations, LLC. based in Grand Rapids, Mich., is widening its partnerships with retailers around the country, including big chains like Albertsons Cos., Costco Wholesale Corp. and Target Corp. and smaller independent stores, to provide MessageWrap coverings for conveyor belts that can be easily added and switched out based on ad campaigns and information.

The pandemic accelerated interest in the checkstand communications platform that fuses marketing and sanitation via an antimicrobial surface. “We’ve realized that it is a vehicle for the store experience,” said Nathan Vanderploeg, CEO.

While the belt covers simultaneously serve as a touchpoint for advertising and the sanitary movement of products from a cart or basket to the bagging area, they represent another best practice for customer relations. “It’s a captive audience for two to five minutes, and people look at it when putting their groceries on it – it’s a loyalty moment and a moment when the cashier is interacting with shoppers,” Nathan Vanderploeg explained. “This is one of the only parts of the store where there is a human being standing next to you, and grocers use this as a visual aid. Shoppers can ask about an initiative that is on the MessageWrap, where it's a limited time offering or a ‘Drive Up and Go’ service.”

Added founder Susan Vanderploeg: “We've had store managers who have huddles and talk about what they are promoting (on the covers) at checkout. It’s a powerful way to get engagement.”

MessageWrap was Susan Vanderploeg’s brainchild. The former SVP of properties at Grand Rapids-based Meijer started the company in 2011 when she saw an opportunity to address shoppers’ frequently-voiced concerns about the handling of items at checkout on conveyor belts that they perceived as less than hygienic. She used her educational background in biochemistry and worked with fellow Grand Rapids company Mol Belting – which makes more than 95% of grocery checkstand conveyor belts in the U.S. – to engineer and execute the new concept for food grade belts. 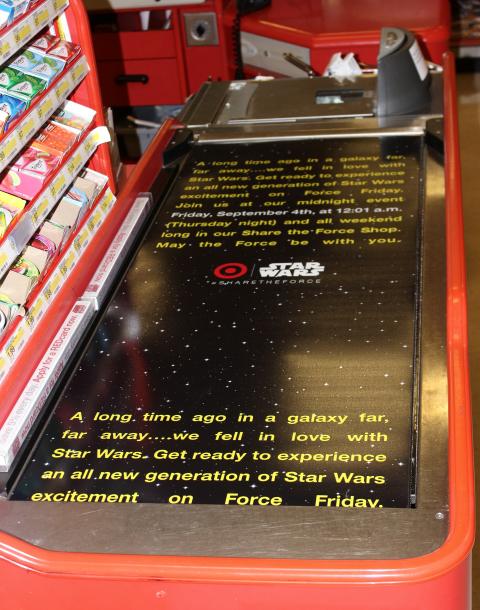 Handstand Innovations holds a patent on the antimicrobial belt covers, which are self-aligning and can be installed in as little as two minutes. The materials are in place at several retail locations around the U.S. and other countries, including large format stores like Costco and smaller format stores with one or two locations.

As checkout areas evolve, the company has been working with retailers that have convertible stands in place that can be used for either full-service or self-service scanning. In addition, MessageWrap offers printed antimicrobial counter mats that can be installed on surfaces in self-checkout areas.

As for content, ads on the belt coverings span a variety of topics and frequently include QR codes to tie together the physical and digital store experience. “Some are for charity programs, others are to promote private label. Originally, we thought the messages would be mostly from CPGs, but the retailers think that it’s such a high-profile experience that they want to use it,” said Nathan Vanderploeg, adding, “Most commonly, they are used for quarterly programs, but the MessageWraps can last six months or more.”

One program, a custom belt covering created for the Washington state lottery, demonstrated the value of the concept. “Two years ago, we did a 13-store pilot that resulted in a 25% increase in sales and a 13-to-1 dollar return. It was tested three months before, three months on, and a month after the MessageWrap was on, so it’s a pretty good case study,” reported Brett Wildman, client services manager for Handstand Innovations. This summer, new wraps touting the latest Washington lottery campaign will be reinstalled in Safeway and Albertsons stores in that state, Wildman noted.

Finally, as Handstand Innovations expands its relationships with grocers at a time when hygiene and messaging are top of mind, the company is planning other improvements to the concept. “We are working on ‘What is the afterlife?’ of this product. We have a couple of things that we are looking at,” shared Nathan Vanderploeg.