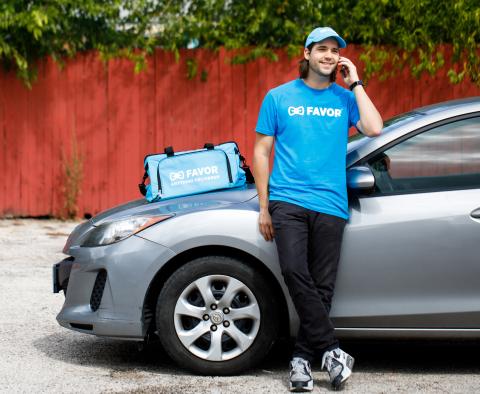 H-E-B's Favor service provides delivery from H-E-B stores as well as restaurants and other retailers.

H-E-B's delivery service division Favor is increasing benefits for its employees at the same time as states such as California put pressure on companies to better protect so-called gig workers.

Favor announced Tuesday that its drivers will now automatically be provided with commercial automotive liability insurance coverage during every active delivery with Favor, at no cost to workers, or as the company calls them: Runners.

“This insurance immediately provides Runners with additional protection for every Favor delivery,” said Steven Pho, Favor president. “We designed this coverage without any hurdles for the Runner — no required signup or enrollment period, or any fees, premiums or copays. Every delivery is now automatically covered on the Favor platform.”

In September California's governor signed a law that could have ripple effects on many gig-economy companies operating in other states, including grocery delivery platforms such as Favor. The law, which takes effect on Jan. 1, aims to change the way that gig workers are classified and requires companies to offer these workers other protections, such as higher wages, insurance and other benefits.

Favor says it currently provides its Runners with primary auto liability along with contingent collision coverage while on an active delivery for Favor. The company's auto insurance policy steps in to provide commercial liability protection to Runners when an accident occurs on an active delivery. The new policy also provides assistance for damages to a Runner’s vehicle during an active Favor delivery, in excess of coverage provided by a Runner’s personal auto insurance.

“This is a huge milestone in strengthening our support for Runners across Texas,” said Pho. “We are dedicated to delivering the best possible experience for our Runners, and providing them with a sense of security while delivering with Favor is an essential component of that.”

With more than 400 stores in Texas and Mexico, San Antonio-based H-E-B is No. 6 on Progressive Grocer’s 2019 Super 50 list of the top grocers in the United States. Lakeland, Fla.-based Publix and Austin-based Whole Foods rank fifth and 10th on the list, respectively.