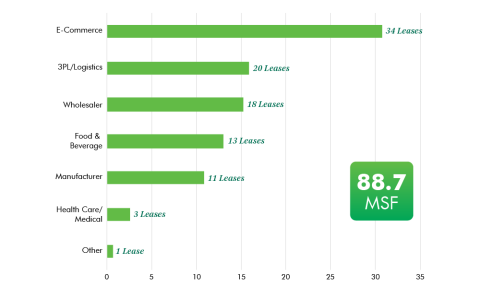 The food and beverage industry significantly expanded its share of the largest 100 U.S. industrial and logistics leases last year while the share claimed by ecommerce and logistics companies receded, according to a new report from Los Angeles-based commercial real estate services and investment firm CBRE.

One of the main drivers of this increased need for warehouse space in the industry is grocery delivery.

“This report, which our team completes each year, often provides us a rough outline of important trends within the industrial and distribution sector -- and the growth of grocery delivery is a clear factor this year,” said John Morris, executive managing director leading CBRE’s Americas industrial and logistics business. “Ecommerce and logistics companies are the needle movers, but food and beverage quickly has established itself as a major player in industrial real estate leasing. This projects continued growth for both dry- and cold-storage warehousing this year.”

Ecommerce companies and logistics companies – which include third-party logistics providers that handle distribution for other companies – still accounted for 52% of the square footage in the largest 100 industrial leases last year, although this is down from 61% in 2018.

CBRE found in its report that some smaller hub cities are gaining new, large warehouses leases, such as Memphis, Indianapolis and Columbus, which all made the top 10 this year. California’s Inland Empire remains the capital of big industrial leases, however.