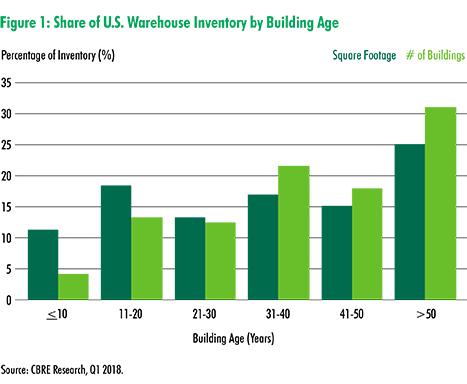 Even though developers have been racing to create new facilities in recent years, most warehouses today are “ill-suited” for ecommerce, new research from CBRE reveals.

Most facilities built prior to the mid-2000s have low ceilings, small footprints, uneven floors and inadequate docking, among other limitations that preclude their use for ecommerce distribution. At the same time, demand is high for modern facilities with larger footprints, high ceilings and close proximity to major population centers – in fact, three out of four warehouses that underwent new leases in 2016 and 2017 were buildings constructed during the five years prior.

Despite roughly 1 billion square feet of new warehouse space being constructed over the past 10 years, the average age of warehouses rose to 34 years from 26 in that span. That’s partly due to new construction amounting to only 11 percent of the entire 9.1 billion-square-foot inventory.

“Ecommerce has created demand for a new type of warehouse with different dimensions, locations and capabilities than what most of the existing U.S. supply offers,” said David Egan, CBRE global head of industrial and logistics research. “Given that only a small portion of the overall market is truly modernized, there is a strong case for new construction and redevelopment of outdated facilities in many markets.”

Looking at markets with oldest and youngest average ages of warehouse stock, one sees clear geographic lines. For instance, many of the oldest markets are in the Northeast, led by northern New Jersey with an average warehouse age of 57, followed by Pittsburgh (56), Boston and Philadelphia (both 44). The younger markets are found more in the South and the West, including California’s Inland Empire (20), Las Vegas (23), Phoenix (26) and Atlanta (29).

“Given the low share of modern warehouse space and the rise of ecommerce, there’s ample opportunity to develop new warehouses and rebuild physically obsolete ones in the best infill locations,” CBRE wrote.