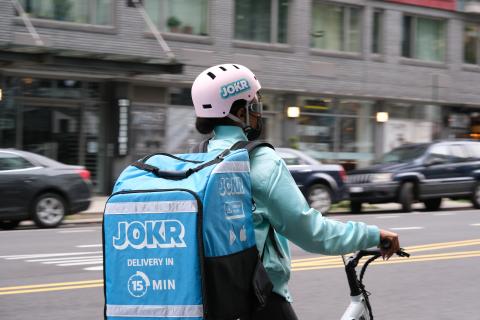 Jokr is a hot new vertically integrated entrant in the delivered products space.

The future of food retailing has little to do with how attractively perimeter departments are merchandised or the elimination of friction from the store experience. That’s a reasonable conclusion judging from the billions in funding, deal activity and key personnel moves involving companies focused on last mile delivery solutions.

Activity in the grocery delivery world was already fast and furious prior to the pandemic, but it intensified the past 18 months, and more change is ahead as speed and convenience continue to take precedent as drivers of shopper behavior. For example, several key developments involving Uber, Instacart, goPuff, newer entrant Jokr, and Grubhub, highlight intense interest and an accelerating pace of change when it comes to the delivery of food. Consider the following recent developments: 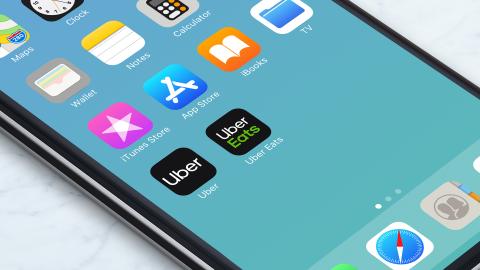 Uber Eats has become a major player in grocery delivery and is posting impressive growth figures.

While all of these developments are notable, the situation with Uber stands out because the company wasn’t even in the grocery delivery space a year ago. Now it is sharing stunning growth and engagement numbers and hinting at a future where its grocery delivery surpasses its restaurant delivery business, and both of those business combined exceeded the ride-sharing operation on which Uber was founded.

“This past year has been one of incredible growth for grocery delivery,” Raj Beri, Uber’s global head of grocery and new verticals, said when the Albertsons deal and national expansion were announced in July. “Today, nearly 3 million consumers order groceries and other essentials each month through Uber and we’re just getting started. By adding thousands of beloved grocers to our selection this year, we are fast-tracking our efforts to help Americans get everything they need from their favorite supermarket, delivered to their doorsteps.”

Uber’s entry into grocery delivery began in October 2019 when it acquired a majority stake in Cornership just five months after going public. Then, last July it acquired Postmates in an all-stock deal valued at $2.65 billion and announced the launch of grocery delivery in the U.S. This past February, Uber acquired the online alcohol delivery marketplace Drizly for $1.1 billion in stock and cash. Then in May, Uber announced a partnership with GoPuff, an operator of hyper-local small fulfillment centers which provide an assortment of everyday essential products. GoPuff is also a player in alcohol delivery as it had acquired the BevMo! chain of 161 liquor stores on the west coast and more recently the Liquor Barn chain of 23 stores in Kentucky.

All of this deal activity coupled with organic growth has transformed Uber’s business model in the middle of a pandemic. Uber the ride-sharing company is now Uber the food delivery company rapidly scaling its grocery capabilities. Uber’s delivery business, which includes deliveries from foodservice operators and grocers, surged past the company’s mobility segment last year. The pandemic played a huge role in the shift, destroying demand for rides and increasing demand for delivery amid quarantines and social distancing, but still, the shift has been profound.

In 2020, Uber’s revenues from its mobility segment fell 50% to $6.8 billion, while revenues from delivery grew 130% to slightly more than $10 billion. That trend intensified during the first quarter as mobility revenue fell 65% to $853 million while delivery revenue surged 230% to more than $1.7 billion.

“Our Delivery business continues to grow faster than anyone could have predicted,” Uber CEO Dara Khosrowshahi said in May when first quarter results were released.

Similar comments seem likely in the months ahead as the effects of recent actions show up in sales results later this year and beyond. Khosrowshahi has said that grocery is a potentially significantly larger total addressable market than food delivery and that he “expects grocery delivery to be a pretty significant percentage of our business.” 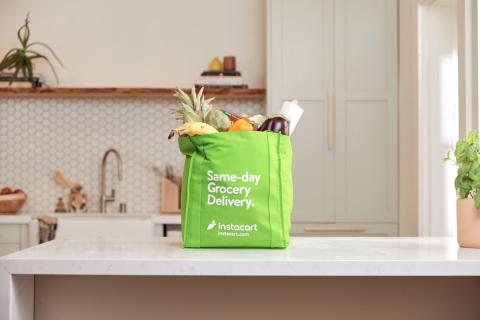 Instacart continues to move closer to an IPO as evidenced by several key personnel moves.

Instacart Innovation and an IPO?

Uber is focused on a dual purpose of helping people get where they want to go or have products they want delivered, whereas Instacart’s purpose is singular. The company has established itself as the leading online grocery platform in North America by working with 600 retailers, 200 of which were added in 2020, who operate roughly 55,000 stores in more than 5,500 cities through North America.

The torrid pace of growth continues to attract investors who in March sank another $265 million into Instacart, giving the company a valuation of $39. Another recent development and several key personnel moves suggest Instacart may finally be drawing nearing to a public stock offering and access to even more capital.

In late July, just two weeks after naming former top Facebook executive Fidji Simo as CEO, Instacart announced a fulfillment initiative that represents a dramatic shift in capabilities and a potential new driver of growth. The company unveiled what it called the first phase of a next-generation fulfillment initiative in partnership with robotic solutions provider Fabric. The key element of the deal involves pairing Fabric software and robotics with Instacart technology and shoppers to power a new fulfillment process within dedicated warehouses and existing retailer locations.

The solution addresses a key shortcoming of manual pick processes by independent contractors picking orders in retailers’ stores where merchandise layouts are not optimized for order picking.

Elram Goren, CEO and co-founder of Fabric, believes software-led robotics and modular solutions give grocery retailers the flexibility to build the fulfillment solution that best fits the needs of their business.

“With Instacart as a partner, we see an enormous opportunity to integrate our product and services into Instacart’s ecommerce solutions to provide a compelling service offering for grocers,” Goren said.

If investors share that believe it could bode well for the company’s long-awaited IPO, which appears increasingly likely following the appointment of Simo as CEO and the addition of several recent board appointments. She spent more than a decade at Facebook, and according to instacart founder and executive chairman Apporva Mehta, was part of every big moment at the company.

“Fidji (Sima) was also at Facebook during its transition from a private company to the public market and understands what it takes to lead and scale a transformational company like Instacart,” Mehta said.

In addition to Sima’s public company experience, Instacart added Barry McCarthy, the former CFO of Spotify and Netflix, to its board in February. More recently, Frank Slotman, CEO of cloud computing provider Snowflake, which went public in September 2020, joined the Instacart board. 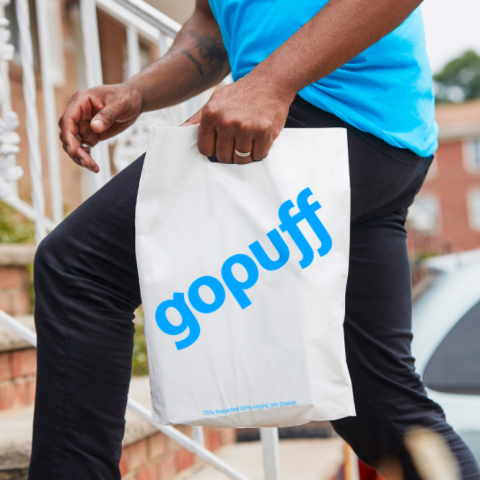 GoPuff has secured another $1billion in funding to expand its delivery infrastructure.

While Uber and Instacart jockey for dominance of grocery delivery, other companies looking to solve the last mile riddle are taking a different approach and attracting massive funding.

GoPuff is reportedly close to securing an estimated $1 billion in new funding after raising $1.15 billion in March. Investors are buying into the company’s vision for ultra-fast delivery, flat rate pricing and expanding product assortment. Unlike the Uber and Instacart platforms, which deliver products on behalf of other retailers, GoPuff’s approach is to vertically integrate and operate as a retailer with growing network of 250 microfulfillment centers that service 650 U.S. cities. The company doesn’t disclose sales, but it occasionally offers a nugget that hints at order volume. For example, in late June, GoPuff said it had made its five millionth delivery in Chicago after operating there for five years.

In addition, GoPuff announced the expansion of a foodservice offering called Gopuff Kitchen that offers a limited assorted of made-to-order food. The kitchen facilities are located within or adjacent to micro-fulfillment centers, enabling customers to order food for any daypart and include the products with other items for the flat rate delivery fee of $1.95.

“Gopuff is launching a completely new category and raising the bar on how technology is making our lives more convenient,” said Daniel Folkman, Gopuff’s SVP of Business. “Nowhere else can you order your everyday essentials while also taking care of dinner for the family or getting a quick coffee, all from one platform.”

The company said it has already delivered hundreds of thousands of orders across more than 20 microfulfillment centers during a pilot program in Austin, San Antonio, Miami, Nashville, Philadelphia and the Phoenix area.

Operating with a model similar to GoPuff is e-commerce upstart JOKR. Launched in April, the company bills itself as a “next generation grocery and retail delivery platform,” and in July secured $170 million in funding. JOKR operates 100 delivery hubs globally, including 10 in New York that were launched in June. JOKR is currently available in nine global cities and plans to use the new capital to expand in the U.S., Latin America and Europe.

Ralf Wenzel, founder and CEO of JOKR said the latest investment will fund an unprecedented rate of expansion and enable the company to build “the premier platform for a new generation of online shopping, with instant delivery, a focus on local product offerings and more sustainable delivery and supply chains.”

The company’s rate of expansion is aided by its simple real estate requirements. It only need about 2,500 to 5,000 square feet of ground floor space with double door access in dense commercial areas.

Adding further turmoil to the U.S. market and the way Americans order food, from whom and how orders are fulfilled, is the recently completed acquisition of Grubhub by Amsterdam-based Just Eat Takeaway.com. Although the deal was announced in June 2020, it wasn’t approved by Grubhub shareholders until June 15, 2021. Both companies are focused on food delivery from restaurants, but so was Uber until it decided to pursue grocery delivery.

The combined Grubhub and Just Eat Takeaway may also find grocery delivery appealing and follow the Uber and DoorDash blueprint. Like Uber, DoorDash began as delivery platform for prepared foods and became the market leader in that segement. However, when the company went public last December it talked about unlocking the power of its logistics platform to serve other types of merchants beyond restaurants.

It made good on that promise with a delivery deal involving Rite Aid in May, followed by Petsmart in June and then its first major grocery deal with Albertsons Companies. The partnership between DoorDash and Albertsons involves delivery from roughly 2,000 stores within an hour. Products can be purchased throught the DoorDash app or directly from Albertsons site.

“Consumers' desire to get everything in their neighborhood on-demand has increased dramatically,” according to Fuad Hannon, head of new verticals at DoorDash. “Leveraging our extensive logistics network and Albertsons wide selection of fresh groceries, we are creating a one-stop shop for customers to access any of the essentials they need, delivered to their doorstep within an hour."