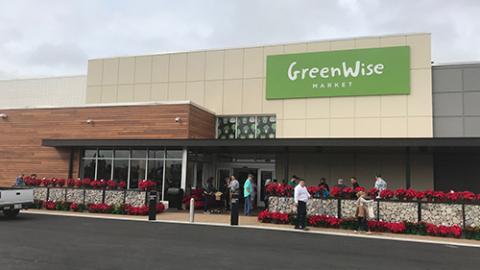 The more than 200 shoppers who waited in line before 7 a.m. for the grand opening of the GreenWise Market in Lakeland weren’t disappointed once they stepped inside the 25,500-square-foot. location. Publix served up a store experience unlike anything most of the long-time Publix shoppers in its hometown had ever seen. In fact, virtually nothing inside the store offers a hint that there is any connection to Publix, aside from some overlap with the offering of the namesake GreenWise brand which is also found at Publix's more than 1,200 stores.

“We really wanted to differentiate with this GreenWise Market,” Maria Brous, Publix director of media and community relations, told Progressive Grocer. “We do have GreenWise products at both locations, but everything else about the ambience and the offering of prepared foods are quite different than what you would find in a Publix. You could eat here every day of the week and have something different for lunch and dinner.” 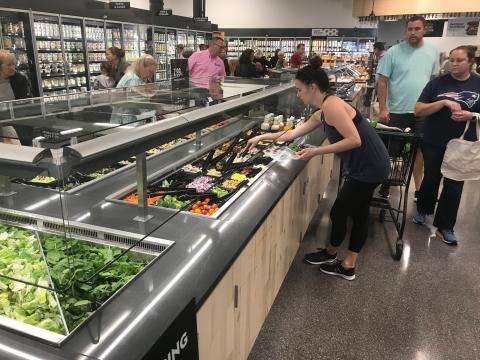 Indeed, the prepared foods area, or what Publix calls the “Eats” experience zone, is positioned just inside the store’s entrance adjacent to produce. Hundreds of items are offered on the store’s salad and hot bar along with custom made pizzas, sushi, burrito bowls and artisan sandwiches made with house smoked meats as opposed to the sub sandwiches which are a staple of Publix deli departments. Once shoppers make a prepared food selection, ample seating areas are provided for on-site consumption. An experience zone dubbed “Pours” serves beer and wine and offers a variety of seating options and a large-screen television. There is also a large, covered outdoor seating area with plenty of ceiling fans to ensure the space is usable during Florida’s sweltering summers.

Another experience zone called “Finds,” located at the front of the store, is where shoppers can purchase specialty cheeses, charcuterie and a wide range of wines, with some costing upwards of $200 merchandised horizontally in a chilled glass case. The meat department at the rear of the store offers a wider selection of fresh, never frozen seafood and specialty beef and pork products. For example, 40 types of sausage are made in house with 17 types merchandised at any given time. 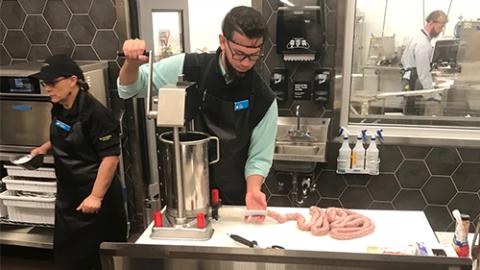 “Shoppers are looking for an experience and that is what we are providing,” Brous said. “This store is all about discovery.”

There was plenty for shoppers to discover, but what they didn’t find is noteworthy as well. Leading national brands common in Publix and other mass market retailers are largely absent. GreenWise Market strives for a highly differentiated assortment with about 70% of products designated as natural or organic, another 25% characterized as specialty items and then 5% considered traditional brands. But even with the traditional classification, Publix is taking a unique approach.

For example, the store offers Boars Head brand meats in the deli, but it is the brand’s Simplicity line. In the condiments aisle, Ken’s and Hidden Valley Ranch dressings are offered, but it is the organic variant. The same approach is evident in ketchup, the few SKUs of Heinz that are offered are organic version versions and located on the bottom shelf.

What’s next for GreenWise Market 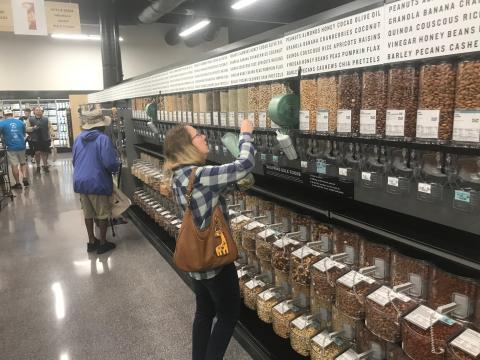 The crowd gathered before dawn at the Lakeland opening was larger than normal due to the fact that Lakeland is Publix's hometown and buzz had been building about the store for the past year. It’s location at 4747 S. Florida Avenue was the site of a former Kmart that was torn down to make room for a new shopping center that would be home to the GreenWise Market and Lakeland’s first Home Goods, a fast-growing concept from the TJX Companies. The location in Boca Raton was also a newly constructed store.

“These are the first two stores that were intended to be ground up,” Brous said.

Following the Lakeland and Boca Raton openings, and an opening the prior week in Lexington, S.C., there are now a total of six GreenWise stores, which are described as new-generation stores. That’s because the concept was introduced a decade ago and then re-imagined last fall when a location was opened in Tallahassee. A total of 12 locations have been announced, but beyond that the company hasn’t provided a growth target.

Nevertheless, it is clear Publix is more serious about serving a shopper segment that it’s conventional stores aren’t able to fully satisfy. The discriminating natural and organic shoppers, those who question the type of casing used to make sausage or seen studying labels of unfamiliar brands throughout the stores, GreenWise aspires to satisfy are viewed as complementary as opposed to cannibalizing existing Publix stores. That thesis will be put to the test in Lakeland where the new GreenWise Market is directly across the street from a traditional Publix.

Watch a video of the grand opening on our Facebook page.