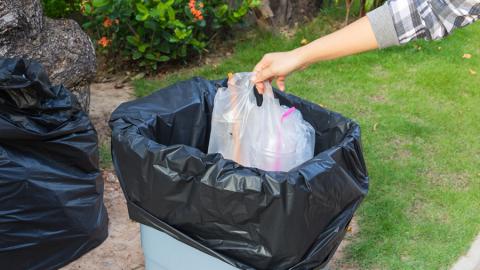 According to research from the Grocery Manufacturers Association (GMA), almost eight in 10 (77%) Americans think that the federal government must take the lead in addressing packaging waste, as it did in putting a man on the moon in the 1960s.

“We must stop passing the torch among stakeholders to fix the recycling system – we need strong, uniform guidelines to bring about substantive change,” asserted Geoff Freeman, president and CEO of Arlington, Va.-based GMA, which will become the Consumer Brands Association (CBA) in January 2020. “The consumer packaged goods (CPG) industry is making huge strides in improving the recyclability of its products. Our industry will do more and can do more with a functional system, but our best efforts cannot be enough on their own.”

The association pointed out that currently, the U.S. recycling system comprises more than 9,800 individual programs, each with its own myriad rules and policies. Although 96% of respondents with access to curbside recycling said that they take part in these programs, most consumers are unaware that recycling varies by city or county, with 31% assuming recycling rules were set at the state level and 20% believing that they were national.

As a result of these assumptions, 77% of Americans consider recycling a public service rather than a business. Eighty-three percent believe that the plastic and packaging waste problem presents an opportunity for the federal government to lead, with 73% feeling that it’s not doing enough now.

The push for federal involvement in recycling is particularly strong among the one-third (33%) of Americans who’ve seen adverse changes in their own recycling systems, ranging from a reduction in the amount of accepted materials to the elimination of such programs entirely.

A whopping 93% of consumers think that national standards will lessen confusion, and 95% would change the way that they recycle if they discovered they were doing something wrong.

“The CPG industry, packaging material manufacturers, waste haulers, recycling processors, and state and local governments must collaborate with federal policymakers to find a workable solution for our country and our planet,” said Meghan Stasz, GMA’s VP of packaging and sustainability. “Without clear guidelines to empower consumers with the right information, recycling will continue to erode.”

In September, GMA expressed strong support for the Save Our Seas Act 2.0’s proposals to improve the country’s current waste management system and recycling infrastructure.

The organization’s current research comes in the wake of a report it issued earlier this year, which found that a majority of Americans were confused about what can and can’t be recycled. Last month, Freeman appeared at the G20 in Tokyo to warn attendees not to repeat U.S. errors in their own efforts to create successful recycling systems.