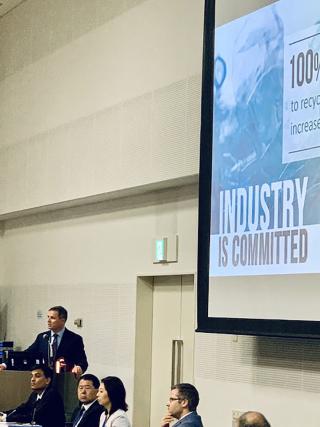 Appearing before the G20 Resource Efficiency Dialogue & Follow-up of Implementation Framework for Actions on Marine Plastic Litter on Oct. 8 in Tokyo, Geoff Freeman, president and CEO of the Arlington, Va.-based Grocery Manufacturers Association (GMA), told delegates not to repeat U.S. errors in their own efforts to create successful recycling systems.

GMA’s position is that the patchwork approach to recycling in the United States, which has thousands of unique recycling systems, has resulted in widespread consumer confusion and is a big reason for low recycling participation. Just 9% of recyclable plastics are actually recycled in the United States, according to the U.S. Environmental Protection Agency.

“Rather than one national system — or even state-by-state systems — the U.S. has chosen to approach recycling on a locality-by-locality basis which eliminates economies of scale and creates massive consumer confusion,” Freeman said in his address to delegates. “I encourage you to use your opportunity to learn from other mistakes and leapfrog to the solutions that empower consumers.”

He identified three key components of boosting packaging sustainability: (1) a committed consumer packaged goods industry working toward more sustainable packaging; (2) consumers who understand how and what to recycle; and (3) consistent recycling standards. Recent research from GMA found that only 4% of Americans believe that the current recycling system is easy to understand.

“Make no mistake, if recycling fails, proposals to ban different types of packaging will increase,” asserted Freeman. “While bans are the wrong approach, so, too, is the current situation.”