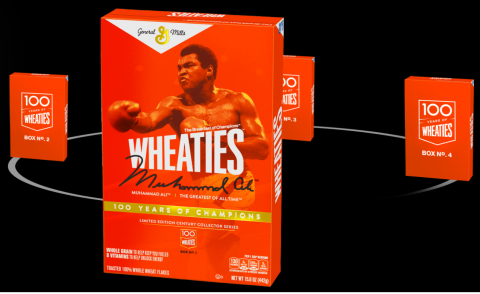 General Mills is generating excitement in the cereal aisle by reintroducing iconic packaging for its Wheaties brand.

The work-from-home movement and increased appreciation for cooking and baking, pandemic-induced trends that benefited grocers the past 15 months, will continue to fuel demand for food at home, according to General Mills Inc. It just won't be at the same levels as last year.

The $18.1 billion consumer goods company said it, “expects that changes in consumer behaviors driven by the COVID-19 pandemic will result in ongoing elevated consumer demand for food at home, relative to pre-pandemic levels. These changes include more time spent working from home and increased consumer appreciation for cooking and baking.”

“With roughly 85% of the company’s net sales representing at-home food occasions, these dynamics are expected to result in lower aggregate consumer demand in the company’s categories in fiscal 2022 compared to fiscal 2021 levels,” the company announced when it shared fourth quarter financial results for the period ended May 30. Those results showed steep declines due to comparisons to a prior year period, which captured the full effect of shoppers’ unusual behaviors at the onset of the pandemic.

“We competed effectively, generated strong top and bottom line growth, and further improved our balance sheet, allowing us to resume dividend growth and share repurchases,” said Jeff Harmening, General Mills chairman and CEO. “In addition, we advanced our Accelerate strategy by investing in our brands, strengthening our capabilities, building on our leading position as a force for good, and taking significant steps to reshape our portfolio and our organization for future growth.”

He characterized the consumer environment as highly dynamic and said General Mills was taking action to address near-term cost pressures while remaining focused on the long-term growth opportunities through its Accelerate strategy.

That strategy focuses on four pillars to create competitive advantages and win. Those pillars include, “boldly building brands, relentlessly innovating, unleashing scale, and being a force for good.”

The company also said it was seeing 7% inflation across its various inputs, but shared that those increased costs were being offset by pricing actions the company has taken across its portfolio. Those comments are consistent with other CPG companies who have announced price increases.