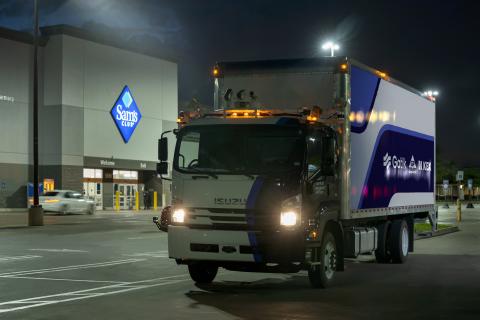 Starting in July, Gatik will automate part of the Georgia-Pacific-KBX on-road transportation network in the Dallas-Fort Worth metroplex, delivering goods 24/7 to 34 Sam’s Club locations.

Autonomous-vehicle provider Gatik has embarked on multi-year commercial partnership with Georgia-Pacific, one of the world's largest manufacturers and distributors of tissue, pulp and paper-based packaging, and KBX, the transportation arm for Koch Industries and an independent Koch company. Under this partnership Gatik will automate part of the Georgia-Pacific-KBX on-road transportation network in the Dallas-Fort Worth metroplex, delivering goods 24/7 across a network of 34 Sam’s Club locations.

Beginning in July, Georgia-Pacific shipments will move from point to point on predefined short-haul routes using a dedicated autonomous-vehicle fleet with 26-foot boxes – the first time that class 6 autonomous box trucks will be deployed in short-haul logistics networks traditionally using class 8 trucks. By replacing traditional tractor trailers with autonomous box trucks, Gatik aims to establish a more responsive and flexible logistics network, increasing the pace of delivery runs and the flow of goods while lowering logistics costs and enabling near real-time inventory fulfillment.

“Our partnership with Georgia-Pacific and KBX is poised to transform regional distribution architecture that has traditionally relied on class 8 platforms,” noted Gautam Narang, CEO and co-founder of Mountain View, Calif.-based Gatik. “By integrating our class 6 autonomous solution into KBX’s sophisticated infrastructure across Dallas-Fort Worth, Gatik will be able to deliver Georgia-Pacific products to a vast network of Sam’s Club locations with unparalleled reliability, speed and consistency.”

“We are looking forward to testing this transformational technology to deliver Georgia-Pacific brands like Quilted Northern bath tissue and Dixie products to Sam’s Clubs,” said Hayes Shimp,VP of sales at Atlanta-based Georgia-Pacific. “Once proven, we believe autonomous deliveries will enable us to remove cost and complexity from the supply chain so that we can better serve Sam’s Club and their members.”

“KBX is focused on providing services that increase capacity and reduce costs in a safe, efficient way for the customers we serve,” observed Paul Snider, president of Green Bay, Wis.-based KBX. “Our partnership with Gatik will enable us to redefine the traditional class 8 short-haul market and deliver Georgia-Pacific goods with even greater speed and efficiency. We’re excited to see these operations form the foundation of KBX’s Autonomous Vehicle Program as we prepare for wider-scale adoption of autonomous trucks to meet customer demand.”

As part of its plans to establish a long-term presence in the Lone Star State, Gatik debuted its autonomous trucking facility in Texas in 2021. The company’s operations there are expected to create more than 500 new jobs by 2025, including operational, technical and business roles.

Recently, Gatik revealed that it would begin operations in Kansas, after working closely with Sam’s Club parent Walmart and key stakeholders to develop and propose legislation that prioritizes the safe and structured introduction of autonomous vehicles in the state. Gatik has already begun collaborating with Walmart on driverless deliveries in northwest Arkansas.