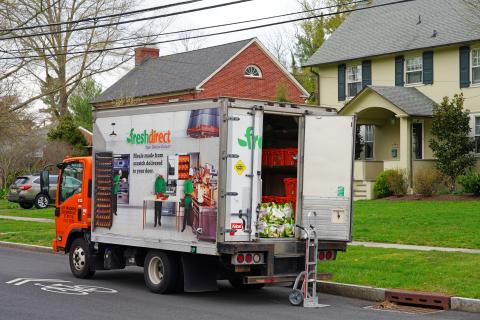 Washington, D.C.-area residents will soon be able to have groceries delivered two hours after ordering them, thanks to an new partnership with micro-fulfillment provider Fabric.

Online grocer FreshDirect is enlarging its service footprint in the Washington D.C., metro area, as well as adding on-demand delivery, through a new partnership with micro-fulfillment provider Fabric. Launching in late 2020, the partnership will leverage Fabric’s robotic fulfillment technology to enable two-hour on-demand delivery of a broad assortment of FreshDirect offerings to its D.C. customers.

According to Bronx, New York-based FreshDirect, the collaboration will lay the groundwork for further service upgrades as it moves into more markets across the country. To that end, the e-grocer’s first venture into the automated micro-fulfillment space is expected to drive critical efficiencies, allowing faster service and a considerable uptick in order volume capacity.

“Washington, D.C., has always been an important market for FreshDirect, and we are excited to partner with Fabric to meet the current surge in demand while improving the customer experience,” said FreshDirect CEO David McInerney. “Fabric’s technology will allow us to turn our existing regional facilities into high-velocity automated distribution centers, speeding our expansion into new markets with two-hour on-demand delivery.”

The upgrades will be implemented across FreshDirect’s D.C. metro delivery footprint, which encompasses the Washington D.C., Silver Spring/Potomac and Vienna/Dulles areas. Following these improvements, customers will be able to order from a wide selection of high-quality fresh food and grocery items within a two-hour window, along with the existing next-day service.

“FreshDirect is the pioneer of grocery e-commerce in the United States,” noted Elram Goren, co-founder and CEO of Fabric, which has offices in New York and Tel Aviv. “Now with Fabric's robotic micro-fulfillment technology, purpose-built for on-demand fulfillment, they are positioned to best serve their Washington D.C., customers profitably and at scale. We are thrilled to announce this strategic partnership as one of the first steps in Fabric’s continued expansion across the United States.”

Earlier this year, the company launched two-hour delivery to shoppers in Manhattan, Brooklyn and parts of Queens.