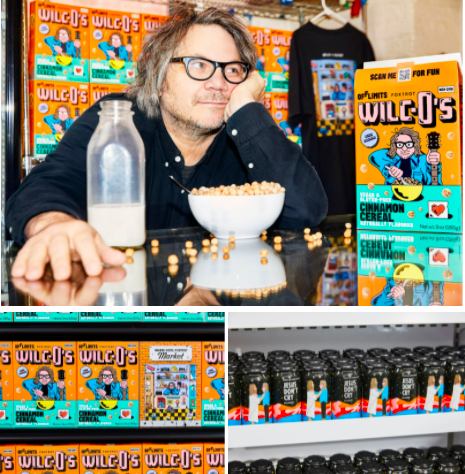 Marking the 20th anniversary of the Wilco album, "Yankee Hotel Foxtrot", c-store Foxtrot is collaborating with the rock band on a limited time collection and promotion.

Foxtrot is aiming to strike the right chord with shoppers in a new collaboration with the rock band Wilco. The Chicago-based convenience market and the Chicago-based musical group are teaming up to offer a curated collection of products and an in-store “takeover” of one Foxtrot location in that city.

Meanwhile, the Foxtrot store in Chicago’s Old Town neighborhood will feature custom signage and displays centered on the Yankee Hotel Foxtrot album. Foxtrot is transforming the space for the next couple of weeks.

As Foxtrot rolls out its retail duet with Wilco, the company is also marking the grand opening of a new store at the site of the former Chicago Tribune newspaper. On April 20, the retailer will offer free coffee and other goodies at that location inside Tribune Tower, 166 E. North Water Street. The 1,739-square-foot store also includes a café and patio.

Foxtrot, which bills itself as the “convenience store of the future,” continues on an ambitious path of expansion, with at least 25 new stores planned for 2022 and recent $100 million in Series C funding from investors.