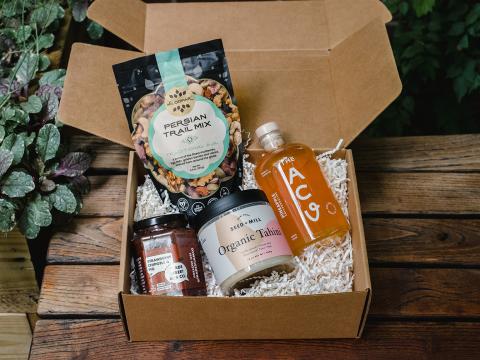 "Nilou's Fave Female Makers" is one of the curated boxes offered through the new "Foxtrot Anywhere" service.

The fox is on the loose: Upscale convenience-oriented retailer Foxtrot Market is introducing a national delivery platform featuring an array of curated bundles and boxes.

Beginning this week, Foxtrot customers around the country can order a variety of products through the new “Foxtrot Anywhere” service. Offerings include rotating gift bundles such as a curated box of adaptogenic products for $50, a “Pasta Night” box for $65 and a “Salty, Sour + Sweet” box for $30, among several others. The retailer is also offering a “Made by Foxtrot” box with original collections.

To promote the launch, Foxtrot is teaming up with food expert and television personality Nilou Motamed, who created different assortments spotlighting female makers, kitchen staples and host/hostess items. Ten percent of the proceeds from those gift boxes will be donated to the nonprofit World Central Kitchen.

Motamed is the first in a series of tastemakers who will be involved in Foxtrot's delivery platform. The service will feature picks from other culinary pros who will curate their own boxes of items culled from various food entrepreneurs.

The addition of nationally delivered boxes and bundles comes at a time of continued expansion for the Chicago-based Foxtrot. In July, the company announced plans to open 50 new stores within the next two years and shared the rollout of five-minute pickup service, among other growth initiatives.