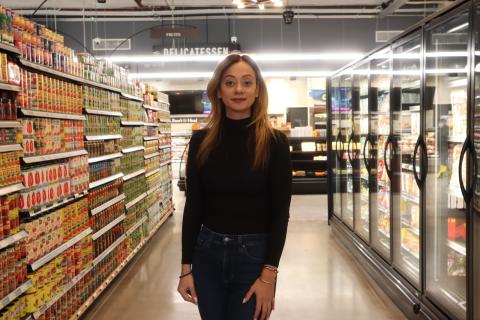 OPINION: AHEAD OF WHAT'S NEXT

Urban Market Chicago, which opened last December in its namesake city, is a 40,000-square-foot grocery store owned and operated by business partners Christina Palivos and Maria Dernis. As one of the few female-owned grocery stores in the country, the store plays a key role in its community of River West by helping create more economic diversity while supporting area employees and suppliers, and paying tax dollars that stay right in the neighborhood. I connected recently with Palivos to get her take on what it’s like to be a woman running a local independent grocery store.

“The idea for Urban Market started years ago,” says Palivos. “Both Maria and I are foodies, and we both grew up in a Greek household, so there was always food, and we were always around the food and grocery business. We both just grew up around the kitchen.

“So, when we put together Urban Market, we really wanted to compile a number of different concepts and ideas to create a destination,” continues Palivos. “We knew that our customers were expecting a lot, not just a place to buy food and leave, so we added a café, we added a bar, fresh food stations, and a meat section that doesn’t have a rival in the city in terms of quality and selection. There was also a huge emphasis on providing local items, because, as an independent store, we know the extraordinary value in supporting other local businesses.”

More Than a Boys’ Club

When asked about the difficulties that a woman encounters running a local grocery store, she replies: “It’s absolutely a boys’ club, and it’s always been like that. It’s because all the guys [in this sector] go into certain businesses that have traditionally been male-dominated, and [it] stays like that for generations. ... That’s not to say that women can’t or shouldn’t go into the business, but I know it’s more of a challenge. There’s going to be more of proving yourself and being assertive.”

Things are evolving, however, she observes. “I do see more food suppliers being women, women of color and from backgrounds that aren’t traditional, and I love doing business with them,” asserts Palivos. “Especially after COVID, it does feel like it’s a whole new generation of people getting into the food business that may not have if things hadn’t happened how they did the last two years.”

In giving advice to anyone, regardless of gender, who wishes to open a neighborhood grocery store, Palivos is quick to point out the advantages that she and Dernis had because of their longtime involvement in the industry, well before they took the plunge of store ownership themselves. “Both of our husbands have owned stores, and they’ve been instrumental in the development of [Urban Market] — the opening and managing — and that support has been crucial to us both,” explains Palivos. “I think anyone thinking of starting out in this business needs to spend a lot of time immersed in it, because there are so many intricacies and insider-baseball elements that you have to have that deep experience.”

When it comes to women store owners in particular, she notes that “it’s also critical to have support at home and with your family, because anyone in the grocery business will tell you that it takes up all of your time, so you have to [be] ready to make sacrifices, and that mostly comes from time at home.”