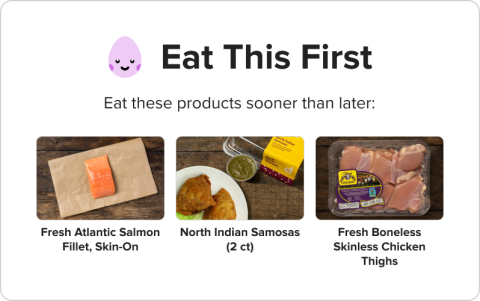 Farmstead's new Eat This First feature reminds customers which food in their refrigerator is likely to spoil first.

Online grocer Farmstead is making it easier for customers to reduce their food waste through a new Eat This First feature on receipts.

Using its sell-by date inventory control and automated procurement systems for perishables, Farmstead is able to alert shoppers to which products in their order they should consume first. All receipts will now include the Eat This First section, which can remind a customer, for example, to eat the fresh salmon before other items.

“Food waste reduction has been a core tenet of Farmstead since our founding,” said Pradeep Elankumaran, co-founder and CEO of Burlingame, Calif.-based Farmstead. “We developed our own in-house logistics and inventory software specifically to reduce food waste in our own warehouses. While a typical grocery store has 30 to 40% food waste, Farmstead is in the single digits.

“In introducing ‘Eat This First,’ we’re extending that capability out to each customer,” Elankumaran continued. “We are the only online grocer able to deliver it due to our digitized inventory control.”

As part of its grocery delivery, Farmstead leverages proprietary artificial intelligence technology and a dark-store model — delivery-centric warehouses that generally serve a 50-mile radius — to reduce costs and maximize efficiency. It offers a mix of fresh produce, national brands and local products at prices comparable to or lower than most supermarkets.

The e-grocer recently joined forces with global logistics company Dematic to help grocers achieve operational efficiencies through software and automation that amounts to a “warehouse in a box.” Farmstead created its Grocery OS software to run the company’s own grocery business, and later licensed the solution to help others start and manage their own grocery e-commerce operations.

Farmstead is growing quickly, with plans to expand nationwide to a primarily suburban mid-market audience. Its service originally launched in the San Francisco Bay area, and has since expanded to Charlotte and Raleigh-Durham, N.C., and Miami. Service rolled out to Chicago in February via a new 30,000-square-foot warehouse, located in Franklin Park outside the city.