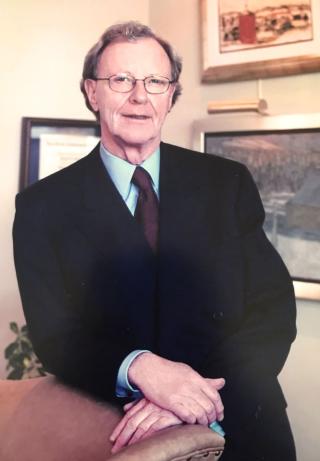 Donald Creighton Rae Sobey, C.M., chair emeritus of Empire Co. Ltd. has passed away at the age of 86. He is survived by his wife, Beth; three children; and five grandchildren.

Donald’s father, Frank Sobey, opened the first modern Sobeys supermarket in Atlantic Canada in 1947.Like his brothers Bill and David before him, Donald was introduced to the family business at an early age. After graduating from Queen's University in 1957, Donald joined his father and brothers in the business, first in real estate financing for the rapidly expanding Sobeys grocery business, and then with Empire, which had been set up to diversify the family's business interests.

He joined Empire's board of directors in 1963, before being appointed president in 1969 and chair in 1985. In September 2004, Donald retired as chair and was named chair emeritus, in which role he continued to be actively engaged in the business as a member of the board of directors until 2015. Donald's legacy includes a student scholarship he created for educational opportunities, artists he supported throughout their careers, and countless other individuals and organizations he worked alongside throughout his philanthropic endeavors.

"Donald's impact on the Empire group of companies was profound. He was a brilliant businessperson, and his legacy of value creation speaks for itself," said Jim Dickson, chair of Empire. "But beyond his success in business, Donald was someone who cared deeply for his community, giving his time, energy and resources to support so many important causes across the country. The impact of his generosity will certainly be felt for generations to come. He will be deeply missed by all who knew him."

His honorary degrees/diplomas and awards included:

"Empire and Sobeys owe so much to the leadership, business acumen and passion of Donald," said Michael Medline, president and CEO of Empire. "On behalf of all of our teammates across Canada, I want to extend our collective heartfelt condolences to his wife, Beth, and their children and grandchildren. Donald was a great businessperson as well as a visionary philanthropist who believed in nurturing Canadian artists and supporting the next generation of leaders. We will all miss him."

Empire is a Canadian company based in Stellarton, Nova Scotia. Its key businesses are food retailing, through its wholly owned Sobeys chain, and related real estate. Sobeys is No. 21 on The PG 100, Progressive Grocer's list of the top food retailers in North America.

With approximately CAD $26.6 billion in annual sales and CAD $14.6 billion in assets, Empire and its subsidiaries, franchisees and affiliates employ about 127,000 people.