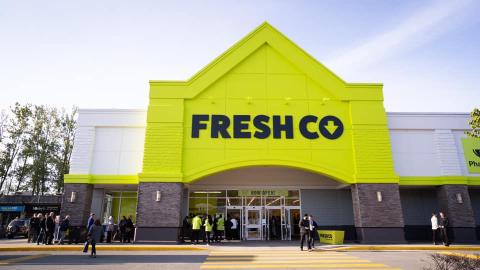 Sobeys parent company Empire is on track to open 65 additional FreshCo discount-format stores by the end of 2022.

Empire, parent company of Sobeys Inc., saw same-store sales, excluding fuel, increase 18% in its fourth quarter, ended May 2. The company attributed this growth to shifts in shopping patterns during the COVID-19 pandemic as consumption moved from restaurants and hospitality businesses to grocery stores.

The company's Hero Pay program, which ended June 13, along with additional safety and sanitization expenses, increased selling and administrative expenses by approximately $80 million in the fourth quarter.

Empire noted that across Canada, online grocery sales have more than tripled since before COVID-19, and the company has seen septupled online sales in Quebec and British Columbia. Sobeys' Ocado-powered automated fulfillment center will have its customer launch this month, powering Voilà delivery orders in Ontario.

“This is one of our proudest quarters in Empire’s 113-year history”, said Michael Medline, Empire's president and CEO. “Our 127,000 teammates across the country gave their all to keep our customers safe and healthy and our grocery shelves stocked during the unprecedented coronavirus pandemic. Due to their herculean efforts, our company saw significant market share increases. Our team has also surpassed our Project Sunrise turnaround targets. This three-year transformation is one of the most significant turnarounds in Canadian retail history.”

Based in Stellarton, Nova Scotia, Sobeys Inc. owns or franchises about 1,500 stores in all 10 Canadian provinces under retail banners that include Sobeys, Safeway, IGA, Foodland, FreshCo, Thrifty Foods, Farm Boy and Lawtons Drug Stores, as well as more than 350 retail fuel locations. It employs more than 120,000 associates. Sobeys is No. 21 on The PG 100, Progressive Grocer's list of the top food retailers in North America.