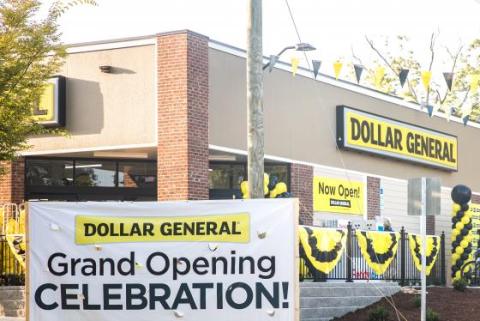 Dollar General reported 78% of the company's 2019 sales of $27.7 billion came from food and consumables.

Residents of Washington state can expect to see a lot of black and yellow in the coming years as Dollar General has opened the first of what will presumably be hundreds of locations bearing the company’s signature colors.

Dollar General opened its first store in Washington in the small town of Cathlamet on the banks of the Columbia River west of Portland, Ore., as part of an ongoing push into the northwest. Six additional locations are under construction in the state and are part of massive new store opening plan for 2020.

Grocers should take note as 78% of discount retailer's 2019 sales of $27.7 billion came from food and consumables.

“Dollar General is proud to extend our store presence and bring our mission of serving others to Washington state residents. We are proud to be able to open and operate stores to serve our customers and communities with an affordable and convenient retail option particularly during these unprecedented times,” Steve Sunderland, Dollar General’s EVP of store operations said in a statement. “We believe the opening of each new Dollar General store represents positive economic impact, and we look forward to being a longstanding business partner and serving our Washington customers.”

As of February 28, Dollar General operated 16,368 stores in 45 states. The company previously announced plans to open 1,000 new stores, remodel 1,500 others and relocate 80 stores this year. Those targets were reaffirmed on March 12 with the release of fourth quarter results that were shared the day before President Trump declared a national emergency. The company has not provided an update on whether its expansion plans are proceeding on target, which is noteworthy because other expansion-minded retailers, most notably Target and Ulta Beauty, have reduced store opening and remodeling plans. Others such as Tractor Supply have said they are deferring capital expenditures but did not specifying how.

If Dollar General is able to follow through on its store expansion plans amid unprecedented COVID-18 related circumstances it will mark the company's greatest increase in store expansion ever. Last year, the company opened 975 new stores, remodeled 1,024 stores and relocated 100 stores.

Increasingly, Dollar General is pushing westward and more recently into the Northwest. In 2012, Dollar General entered California and at the end of the last fiscal year it operated 226 stores in the nation’s most populous state. It entered Oregon in 2015 and now operates 57 stores there. The company would appear to have considerable growth potential ahead in states such as California, Oregon and Washington considering the volume of stores it operates in more mature markets such as North Carolina (870), Alabama (796) and Mississippi (538).