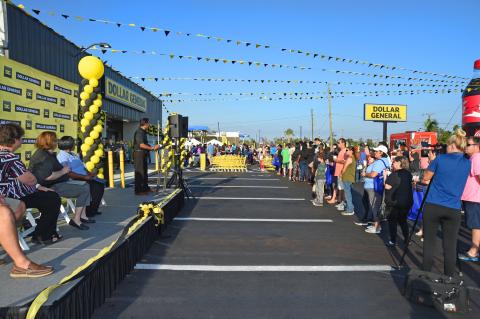 The retailer opened its 16,000th store on Sept. 28 in Panama City more than a year after Hurricane Michael’s October 2018 landfall on the Florida panhandle

Dollar General is marking another impressive milestone in its growth trajectory by opening a store in a community still reeling from a natural disaster.

The retailer opened its 16,000th store on Sept. 28 in Panama City more than a year after Hurricane Michael’s October 2018 landfall on the Florida panhandle.

When the storm hit, businesses closed, residents fled their homes and local schools were damaged. One of those area businesses was the Dollar General location at 3520 East Third Street, which was destroyed.

While the community moved forward in its recovery process, the lot that housed the Dollar General store sat empty — but not for long. By the end of May 2019, residents watched a new Dollar General rise from the destruction, and by the end of September, almost exactly a year after Hurricane Michael’s landfall, Dollar General reopened.

“We are so grateful to be back in this community,” said Dollar General division VP Mo Khan. “Our neighbors in Panama City and Springfield have welcomed us back with open arms, and we are so happy to celebrate our company’s milestone today alongside them. We hope to continue serving them for many years to come, both with great prices, value and convenience, but also through our mission of serving others.”

Panama City and Springfield each designated Sept. 28 “Dollar General Day” in recognition of the company’s milestone grand opening in the community. Dollar General and Kellogg Co. presented two local elementary schools each with $16,000 to support their literacy and education initiatives as part of the day's festivities.

Dollar General has opened nearly 1,000 new stores in 2019, all of which sell fresh food and consumables.

Earlier this month the retailer said it plans to introduce a grocery pickup service for online orders.

"We’ve always tried to be at the leading edge of value and convenience, and we hear our customers talking about [click and collect] a lot,” the company's CIO, Carman Wenkoff, told The Wall Street Journal. He added that a pilot would roll out in the next few months, initially through an app, although he declined to say how many locations would take part.