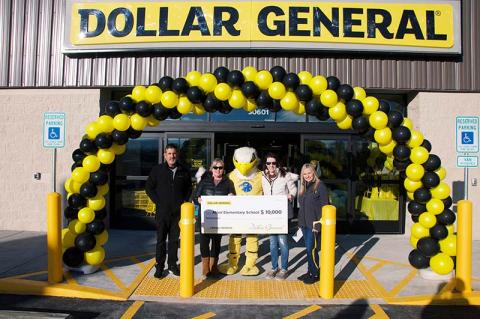 Dollar General donated $10,000 and 100 new books to Athol Elementary School during its grand-opening festivities in Idaho.

Dollar General Corp. has opened its first store in Idaho, increasing its presence to 47 states. The new store is located at 30601 N. Old Highway 95 in Athol.

The discount retailer plans to evaluate additional locations in the state in the near future. It already revealed that it will open 1,110 new stores this year, which is part of its plans to create approximately 10,000 net new career opportunities in fiscal 2022. In addition to new stores, the company is preparing for distribution center and private-fleet growth. Dollar General surpassed 18,000 U.S. locations by the end of 2021.

“It’s with great excitement that we open our first store and bring our mission of Serving Others to Idaho,” said Jeff Owen, Dollar General’s COO. “At Dollar General, we are committed to being a good corporate citizen in each community we call home, including helping our customers to stretch their budgets, providing our employees with opportunities to develop their careers and donating to local charities through our Dollar General Literacy Foundation.”

The company’s Idaho expansion also provides opportunities for nonprofit organizations, schools and libraries within a 15-mile radius of a Dollar General store or distribution center to apply for adult, family, summer and youth literacy grant programs through the Dollar General Literacy Foundation (DGLF). Since its founding in 1993, the DGLF has awarded more than $203 million in grants to nonprofit organizations, helping more than 14.8 million individuals take their first steps toward literacy or continued education.

Dollar General will release its financial results for the fiscal 2021 fourth quarter and full year ended Jan. 28 on  March 17. The retailer experienced a slight dip in same store sales for its third quarter, ended Oct. 29. Same-store sales declined 0.6%. On a two-year stacked basis, which is how many retailers have taken to reporting same- store sales to even out the impact of 2020 sales spikes related to COVID-19, comps increased 11.6%. The company’s total sales, which benefitted from the addition of new stores, increased $3.9% to roughly $8.5 billion.

Goodlettsville, Tenn.-based Dollar General is No. 15 on The PG 100, Progressive Grocer’s 2021 list of the top food and consumables retailers in North America. Dollar General is also PG’s 2021 Retailer of the Year.