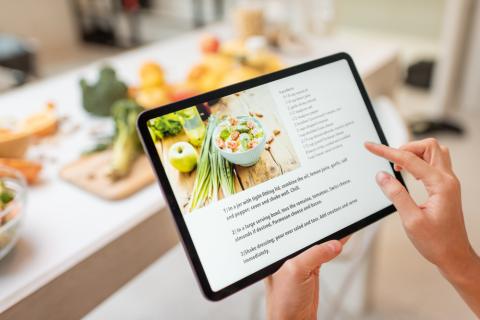 As consumers opt for at-home meals over dining out amid record high inflation, they’re increasingly turning to the digital realm for meal inspiration. Contextual commerce advertising platform Chicory has found that the majority of today’s consumers are using digital recipes for at-home meal planning.

Based on a survey of more than 2,000 U.S. consumers, Chicory’s "Annual Recipe Usage Report" found that nearly all respondents, or 89%, use digital recipes, indicating that recipes are a widely accepted meal-planning tool.

Daily recipe usage doubled year over year, according to the report. This may be a response to inflation: 43% said that cooking from home more due to inflation has inspired them to use digital recipes. As consumers cook more meals at home, they’re seeking out ways to simplify the meal-planning and preparation process. Nearly 40% of respondents reported that they use recipes to save time planning meals, grocery shopping or cooking.

"This year, double the number of respondents said they are using recipes daily," said Yuni Sameshima, CEO and co-founder of New York-based Chicory. "During this period of inflation, as consumers cook at home more, digital recipes are proving to be a powerful tool for the home cook and for brands looking to reach shoppers in moments of inspiration."

When asked "What inspires you to try a new grocery product?," 60% of respondents said it’s because the product is called for in a recipe they plan to cook. Respondents also selected organic search as the most common mechanism for recipe discovery, suggesting that many recipe users have a particular goal, or meal, in mind before landing on the recipe page.

For its annual report, Chicory surveyed 2,126 American consumers, ages 18-85, on June 27. To complete the survey, 1,890 respondents qualified as digital recipe users. The margin of error is +/- 2.3%. The report also revealed year-over-year trends and the top drivers of digital recipe usage.

Chicory’s contextual advertising and shoppable recipe solutions can be found on more than 5,200 websites, including Taste of Home, The Kitchn, LandOLakes.com and thousands of food blogs. According to the company, sites enabled with Chicory's technology take grocery shoppers from inspiration to checkout in just a few clicks, driving products to carts for 60-plus leading retailers.