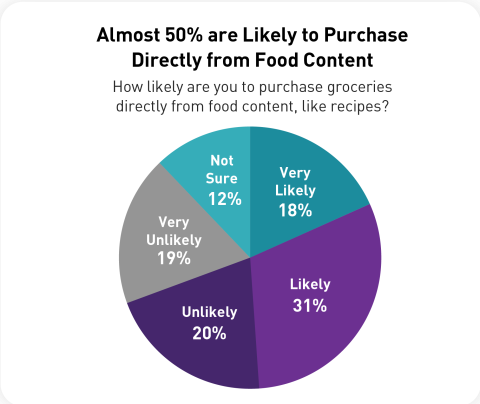 Chicory, a New York-based digital shopper marketing platform, is out with its latest insights on omnichannel shoppers and their path to purchase. According to the firm’s new survey, two-thirds (66%) of consumers have bought groceries online in the past 60 days, indicating that such habits are becoming more entrenched.

To further pinpoint omnichannel shopping habits, Chicory polled consumers based on their backgrounds and interests. The survey revealed an even split between men and women who profess to buying groceries online, and greater propensity for younger consumers to split up their purchases across the physical and digital space. Survey respondents in the 30-44 age bracket show the highest preference for omnichannel shopping.

Omnichannel shoppers extend some loyalty to digital retailers as well as brick-and-mortar stores, the research showed. A strong majority of 80% reported that they are likely to repeat their online purchases and 54% said they tend to stick to the same retailers because they have shopped with them before.

One barrier to loyalty – not surprising in the current inflationary era – is price. Cost was the most commonly cited reason to change the choice of an online retailer. Following price, the factors most likely to sway users to another online grocery retailer were convenience and product availability.

As for how they build their lists and buy, Chicory’s insights show that 58% of digital shoppers visited a retailer’s website or used a retailer’s app in the previous two months, more often to look for deals and ideas than to purchase directly from that platform. Most respondents – 64% – reported that they look to other food blogs and recipe sites for ideas and inspiration for meals; even younger consumers who are prone to use the TikTok social media platform said they commonly search food blogs and large recipe sites. Nearly half of survey participants said they are likely or very likely to make a grocery purchase directly from a food site that gives them meal planning inspiration, underscoring the significance of such resources.

"If brands and retailers aren't yet leveraging off-site content to acquire new customers, they need to start. Today, winning at the shelf requires meeting consumers in moments of inspiration, well before they hit the retailer's store or site,” declared Yuni Sameshima, Chicory’s founder and CEO.