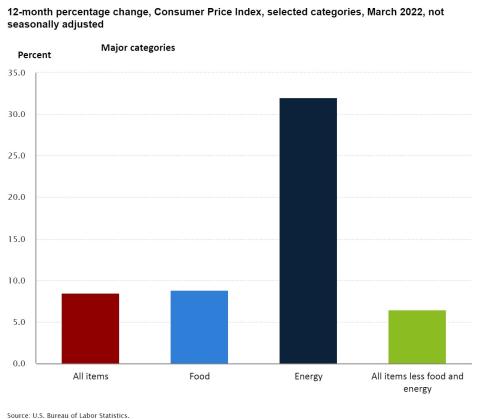 There were hints that the latest government inflation numbers were not going to be good: Ahead of the release, a White House spokesperson said the Biden Administration was expecting the rate to be "extraordinarily inflated" and stock market futures reflected widely-shared concerns. Following those warnings, the U.S. Bureau of Labor Statistics (BLS) released its data showing a 1.2% increase in the Consumer Price Index (CPI) in March over the previous month and an 8.5% leap compared to March 2021.

That year-over-year increase exceeded analysts’ projections of an 8.4% rise and marked the steepest hike in the CPI since December 1981. Prices for food at home went even higher, up 10% from this time last year and 1.5% more than just a month ago.

According to the BLS findings, all six major grocery indexes climbed in March. The CPI for fruits and vegetables rose 1.5%, and other increases came from meats, poultry fish and eggs (+1.0%), cereals and bakery products (+1.5%), nonalcoholic beverages (+1.2%), dairy and related products (+1.2%) and “other food at home” (+2.0%). Within these areas, beef prices were the most affected, rising 16% since March 2021.

In addition to the government figures from BLS, other sources have confirmed the rapid pace of inflation in the food sector. Data and tech company Numerator shared results of its latest inflation insightsrevealing an 11% increase in grocery prices from March 2021 to March 2022. According to Numerator’s survey findings, the 21.6% inflation rate for dollar stores is almost double that of other channels, including online (+13.2%), mass, (+10.5%), food (+9.6%) and club stores (+7.5%).

Many grocers – also anticipating higher CPIs – are focusing on their price competitiveness. Aldi, for its part, released a statement from CEO Jason Hart on April 12 noting that, “No matter what happens in the world around us, Aldi will always be the low-price leader in every community we serve. We have always made shopping at Aldi simple with the lowest possible prices, every day, in every aisle.”

Earlier this spring, Giant Eagle extended its Perks for grocery and fuel through the end of this year to help shoppers maximize their savings.