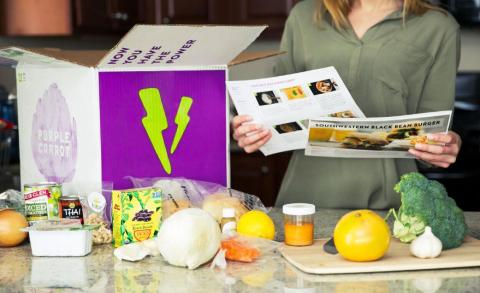 Purple Carrot, which delivers 100 percent plant-based meal kits, has received a $4 million equity investment from Fresh Del Monte Produce Inc., at a time when both plant-based eating and competition in the meal-kit space is stronger than ever.

For Purple Carrot, the strategic investment brings an infusion of capital, along with leverage to increase supply chain efficiency, access the retail channel and expand categories. One way that the provider has expanded unique offerings is through a partnership with football star Tom Brady and his team at TB12, introducing a line of meal kits to help active individuals prepare many of the same meals Brady eats every week.

“Helping people eat more plant-based foods represents our differentiated, purpose-driven commitment to making the planet and the people who live on it healthier," said Andy Levitt, founder and CEO of Needham, Mass.-based Purple Carrot. "This investment by Fresh Del Monte will strengthen our ability to create meaningful and lasting change, improve our core product, and open up a world of possibilities for brand expansion.”

Plant-based eating’s growth is expected to reach $25 million by 2020, double the value in 2015. Moreover, meal kits are expected to become a $35 billion market in 2025, up from $1.6 billion in 2016. Purple Carrot intends to combine the potential for both markets by empowering people to become “balanceatarians” – those who want to consciously and easily integrate plant-based eating into their lives while not completely giving up meat, fish and dairy.

Coral Gables, Fla.-based Del Monte isn't the only CPG that sees a future in meal kits and wants a piece of the action. For instance, last June, Nestlé USA became the lead investor in a $77 million round of new funding for meal-kit service Freshly, intended to help fund the construction of a new East Coast kitchen and distribution center this year, which would assist with nationwide expansion. Not long before that, Unilever Ventures invested in Sun Basket, a meal-kit service focused on organic foods and clean eating, infusing the service with $9.2 million in capital. And around the same time, Campbell's became the largest strategic investor in gourmet meal-kit provider Chef'd, which now, in addition to online, sells its kits through such brick-and-mortar grocers as Gelson's and Tops.