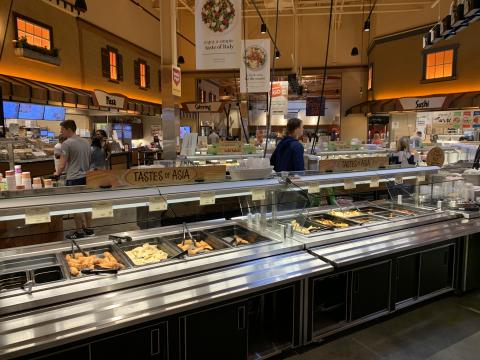 Meals that used to be eaten at restaurants, schools and other foodservice providers are now being made in the home kitchen.

Pantry loading explains part of the sales surge food retailers have seen during the COVID-19 crisis, but displaced restaurant meals account for a percentage too. Now, new data from NPD shows just how big the impact was and could continue to be.

According to the NPD Group, U.S. restaurant customer transactions declined by 41% in the week ending April 5 compared to year ago, following a 42% decline in the prior week ending March 29, which may indicate the industry is bottoming out, reports the NPD Group.

The apparent "bottom" is likely due to the full effect of on-premise dining closures throughout the country and the industry's collective ability to convert to off-premise modes, like carry-out, delivery and drive-thru.

"The 41% decline in restaurant transactions is similar to last week and may indicate a bottom. We also need to be aware that further erosion could occur if consumers' economic situations worsen," says David Portalatin, NPD food industry adviser and author of "Eating Patterns in America." "To date, many consumers have continued to buy restaurant meals through delivery, takeout, and drive-thru to the degree allowed by the restrictive environment; but with rising unemployment, payroll reductions, and temporary furloughs, consumers may begin to think differently about their food budgets overall."

Full service restaurants, which were already challenged prior to the COVID-19 outbreak, experienced transaction declines of 79% in the week ending April 5 compared to same week year ago.

The pandemic has led to grocery retailers experiencing shortages in part because of overbuying but also because the meals that used to be eaten at restaurants, schools and other foodservice providers are now being made in the home kitchen.