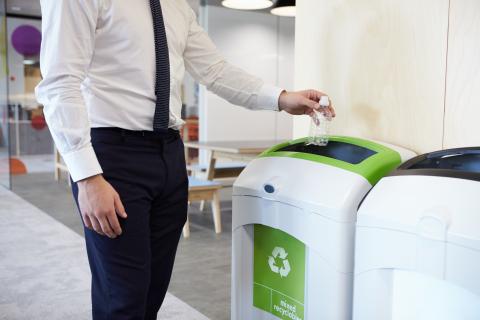 When asked who needed to be part of solving the plastic and packaging waste crisis, 72% of those surveyed placed themselves at the top of the list, but shared responsibility among others, including retailers and CPG companies.

Months of trying to avoid illness during a pandemic have reset the priorities of many environmentally conscious consumers, a new report from the Consumer Brands Association (CBA) has found. Under the current circumstances, in which the coronavirus has led to higher plastic use, the need for an effective recycling system has become imperative.

The Ipsos-conducted survey of 1,016 American adults found that almost seven in 10 (69%) respondents said that they’re more concerned about safety and hygiene than environmental impact. Further, while most (82%) Americans reported being worried about the environment, the figure had declined eight points from 2019. Similarly, concern about single-use plastics, although still high at 80 percent, had fallen seven points from last year.

The United States currently has almost 10,000 individual recycling programs, each with unique rules that give rise to confusion and inefficiency. Just 11% of survey respondents said that they believe the country’s recycling systems are doing the best they can to recycle materials.

“America is using more plastic and packaging to contend with COVID-19, and it is exposing our broken recycling system,” said Geoff Freeman, president and CEO of Arlington, Va.-based CBA. “The pandemic has validated the urgent need for a modern recycling system that can deal with our reality. Where else can you have an 11% approval rating and continue the status quo?”

There was overwhelming agreement that COVID-19 has magnified importance of an optimally functioning recycling system, with 92% of those surveyed saying that recycling was now more or equally as important than before the pandemic for handling the increase in plastics and packaging.

CBA shared its recycling vision with the Democratic and Republican presidential candidates to urge them to fix the United States’ recycling infrastructure. The outreach to the campaigns built on work the organization began through its Recycling Leadership Council and policy platform.

The organization has also expressed support for the U.S. Plastics Pact, a newly formed collaborative of more than 50 NGOs, brands, retailers and government agencies to further significant goals, among them that all plastic packaging be reusable, recyclable or compostable by 2025.

When asked who needed to be part of solving the plastic and packaging waste crisis, 72% of those surveyed placed themselves at the top of the list, but shared responsibility among entities across the packaging value chain. Retailers were held partly responsible for solving the waste problem by 54% of respondents, while 66% said that CPG manufacturers needed to be involved in finding a solution to the issue. By contrast, 51% identified state of local governments and 46% pointed to federal government as key participants in alleviating the problem. Other industries that were singled out as bearing some responsibility for addressing the issue were waste management (70%) and plastics and packaging manufacturers (67%). Meanwhile, 70% of respondents said that waste management companies needed to run recycling systems, and 49% thought that plastics and packaging manufacturers should finance these systems.

“Although we are still fighting a global pandemic, we can’t afford to stop the fight to fix our country’s recycling system,” noted Freeman. “COVID-19 should be a catalyst for saving recycling, not the reason it falters.