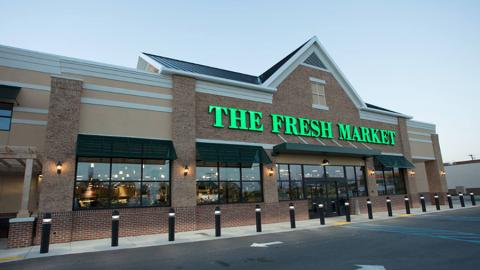 The Fresh Market operates 160 stores in 22 states, including this location in Columbia, S.C.

A Delaware Chancery Court judge has found credible the allegations in a shareholder suit that Scott Duggan, former general counsel and SVP of The Fresh Market Inc., was grossly negligent in drafting and certifying a U.S. Securities and Exchange Commission filing in connection with the grocer’s sale to New York-based private equity firm Apollo Global Management, according to a published report on Law.com.

According to the suit, the filing omitted that Ray Berry, the former chairman and CEO of The Fresh Market, lied to the company’s board about having come to a secret agreement with Apollo in advance of the 2016 merger, that Berry had expressed a “clear preference” for Apollo and didn't want to consider other firms' offers, that he indicated he might sell his shares in the The Fresh Market if it didn’t go through with the sale to Apollo, and the “depth and breadth” of shareholder pressure to sell.

Vice chancellor Sam Glasscock noted in the Dec. 31 opinion that based on Duggan’s “role as general counsel, and given the sales process as pled, I can infer that the omitted facts were omitted with his knowledge.”

He continued: “It is reasonably conceivable that crafting such a narrative to stockholders, while possessed of the information evincing its inadequacy, represents gross negligence on Duggan’s part.

“Of course, another reasonable interpretation is that the [filing] represents a good-faith but failed effort to make reasonable disclosures,” he wrote, “but given the pleading stage, I must choose the inference favoring the plaintiff.”

Glasscock denied Duggan’s motion to dismiss, but rejected the shareholders’ claim that Duggan completed the “sham sale” to Apollo because he was to receive $1.2 million in single-trigger equity-based compensation, and another $1.1 million if he were fired following the merger, observing that Duggan stayed on with the company after the deal wrapped in 2016.

The judge also discounted the argument that Duggan breached his fiduciary duty by not sufficiently questioning Berry about his relationship with Apollo.

Based in Greensboro, N.C., The Fresh Market operates 160 stores in 22 states. The company is No. 41 on Progressive Grocer’s 2019 Super 50 list of the top grocers in the United States.