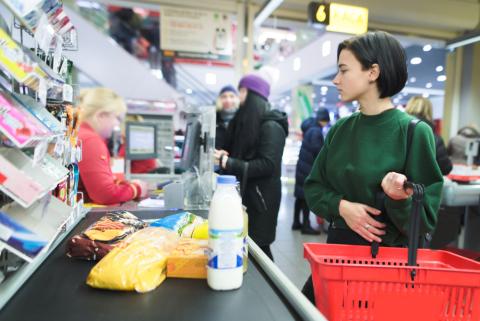 Advance monthly data from the U.S. Census bureau shows an uptick in grocery spending during August.

A summer of ongoing high inflation didn’t put as put much of a damper in consumer spending as anticipated. Advance data from the U.S. Census Bureau showed a higher-than-expected 0.3% rise in retail sales during August, on the heels of a 0.4% decrease in July. In the grocery sector, spending rose 0.2% from the previous month and was up 7.7% from August 2021.

The Census Bureau data follows the U.S. Bureau of Labor Statistics report this week that food prices continue a steady climb, with a 13.5% hike in the consumer price index (CPI) for food at home on a year-over-year basis and a 0.7% increase in the CPI for food at home from July to August.

Heading into fall, the continued mix bag of data reveals an undercurrent of volatility and consumer willingness to pull back spending when deemed necessary. “The numbers from the U.S. Census Bureau retail report were a little better than expected this round. That said, in the midst of inflation, Americans are still being frugal. The relief from declining gas prices is being negated by rising prices in food, housing, healthcare, and more,” Chip West, a retail and consumer behavior expert at marketing firm Vericast, told Progressive Grocer.

Another expert weighed in on the latest government figures. “Back to school purchases, early holiday shopping, and the increase in liquidation sales from retailers moving excess inventory are contributors to the increase in retail spending in August. Much like July where we saw fuel costs drop, prices continued to decrease slightly into August, which promoted consumers to redirect their dollars to pure retail. And in better news for retailers, generic branded products continue to be the priority for consumers, particularly in grocery,” said Piyush Patel, chief strategic business development Officer at e-commerce tech company Algolia.

Patel also projected what may be ahead for retailers with summer wrapping up. “As we approach peak season, we’ve seen retailers urgently trying to move excess inventory off the shelves to make room for what consumers really want this holiday season. Even with massive discounts, sales, and liquidation tactics, I expect that retailers will see margin improvement, especially compared to this time last year. Brands, however, should proceed with caution as to not develop the reputation of “everything is on sale, all of the time.”