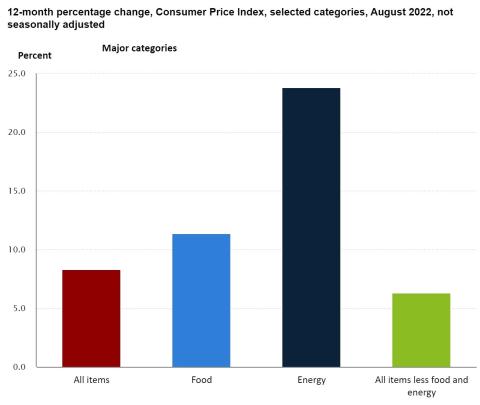 The rate of food inflation is down, but not out. The latest data from the U.S. Bureau of Labor Statistics (BLS) shows that the consumer price index (CPI) for food and, more specifically, food at home, rose at a slight slower pace in August yet is still packing a punch for inflation-wary consumers.

According to the new BLS report, the CPI for all items rose 0.1% in August, following a zero percent change in July. The CPI for food edged 0.8% higher in August, albeit at a slower rate than the 1.1% hike in July. Similarly, the index for food at home rose 0.7% last month, coming off a 1.3% July increase. In fact, August marked the first month of 2022 that monthly increases for both food in general and food at home were below the 1% mark.

[Read more: "Grocers Give Honest Feedback on State of the Industry"]

On a year-over-year basis, though, the inflation rate remains in record territory. The CPI for all items is up 8.3% on a yearly basis while food costs 11.4% more than in 2021 and food at home is 13.5% more than last August. That rate for food at home is the largest 12-month leap since the period ending in March 1979.

Shoppers continued to face some sticker shock at grocery stores in August, as all major grocery store food groups increased. The CPI for cereals and bakery climbed another 1.2% last month, while indexes for meats, poultry, fish and eggs, fruit and vegetables and nonalcoholic beverages each ticked up 0.5% during that time frame. There was some relief in dairy and related products, with a 0.3% rise last month, the smallest hike in that index since November 2021, according to BLS.

“This inflationary pressure is creating volume declines in most categories and is hitting low-income households hardest. In response, these families are pulling back on overall purchases and trading out of the indulgence and splurge categories. Quick trips are also on the upswing, suggesting a shift to more deal-seeking shopper behavior,” IRI's analysts concluded.

As financial experts debate the next actions of the Federal Reserve to stem inflation, other reports point to continued pain at the register. A new analysis from food sensitivity test specialist YorkTest found that the cost of a weekly grocery shopping trip for a family of four could exceed $300 by the end of 2024 if the inflation rate remains on a similar trajectory.

“We all hope that the measures the Federal Reserve is taking to curb inflation will work, so we won’t see the cost of groceries rise to the levels shown in our research. However, the price rises we’ve seen in the past year is putting pressure on households already struggling to pay the bills. Our shopping basket contained essential items that are difficult to cut back on,” remarked Kerri Ferraioli, nutritionist at YorkTest.